Rescue 116 crash: ‘No mechanical anomalies’ in analysis of black box 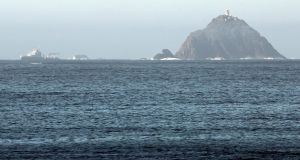 The Irish Coast Guard’s Rescue 116 Sikorsky S-92 helicopter had “no mechanical anomalies” before it crashed off the north Mayo coast with the loss of all four air crew, according to the Air Accident Investigation Unit (AAIU).

The AAIU , which has been analysing the “black box” or flight data recorder as part of its investigation, said that an initial analysis of the data retrieved from the aircraft’s health and usage monitoring system and multi-purpose flight recorder had shown no mechanical faults.

The statement issued by AAIU chief inspector Jurgen Whyte and investigator-in-charge Paul Farrell on Saturday said that the AAIU was mindful that Sikorsky S-92A helicopters are in operation around the world.

“Following an event such as this, many operators and agencies are anxious to learn if any matters are identified during the ongoing investigation that may require immediate safety actions,” it said.

CHC Ireland, which is contracted to provide air-sea search and rescue for the Irish Coast Guard, uses Sikorsky S-92s at its three operational bases in Shannon, Sligo and Waterford. Operations have been suspended at its Dublin base since the R116 crash.

Wind and swell hampered efforts by a West Cork salvage team and Naval Service divers to lift a section of the Rescue 116 wreckage from the north Mayo seabed this weekend in the continued search for two missing air crew, Paul Ormsby (53) and Ciaran Smith (38).

Supt Tony Healy of Belmullet gardai said it was very disappointing but “we are optimistic for tomorrow”.

“Our role is recovery of the crew, but in a safe and efficient manner,”he said.

“We are operating in the north Atlantic in a very challenging environment,”Supt Healy said, but there was an “immense amount” of equipment and experience.

Aerial, sea and shore searches had continued from Mayo to Donegal, he said.

The RNLI Achill and Ballyglass and Arranmore all-weather lifeboats from Mayo and Donegal, and the Sligo and Bundoran inshore lifeboats were at sea again on Saturday, while mountain rescue teams from several counties assisted Irish Coast Guard shore units and Civil Defence in shoreline searches.

“We will conduct this operation in a matter of hours,once the cards fall into place,”Supt Healy said of the sub-sea element, involving the wreckage lift.

The families of Mr Smith and Mr Ormsby were being kept up to date by the Garda liaison officer, he confirmed.

“Divers are being pulled and dragged in the water, while trying to decompress, and are being affected by swells from the south-west on the seabed,”he said.

“The plan is to review the situation at 5am on Sunday and plan from there,”Lieut Humphries said.

“The Marine Institute’s remotely operated vehicle (ROV) will work overnight on Saturday”, he said, and weather conditions are due to moderate on Sunday. However, weather is set to deteriorate after that, he said.

Irish Coast Guard operations manager Gerard O’Flynn has emphasised that the “absolute priority” is to inspect the wreckage to find the two men, still missing19 days after the Dublin-based Sikorsky S-92 helicopter crashed off Blackrock island.

Senior pilot Capt Dara Fitzpatrick (45) was recovered from the sea by the RNLI Achill lifeboat and died within hours of the crash, some 13 km west of north Mayo on March 14th.

The body of her co-pilot Capt Mark Duffy (51) was retrieved from the helicopter’s cockpit last Sunday by the Naval Service dive team.

The Irish Coast Guard, co-ordinating the search for the two airmen with the Garda and Air Accident Investigation Unit, engaged Bere island company Atlantic Towage and Marine, and its 35-metre tug Ocean Challenger for a direct lift, after an attempt to tilt the wreckage using an airbag was hampered by sea conditions.

The west Cork company has been involved in many projects, including recovery of the €18million racing yacht Rambler 100 after it capsized off the Fastnet rock in 2011, the tall ship Astrid which ran up on rocks off Kinsale, Co Cork in 2013, and refloating fishing vessels.

When sea conditions ease, Naval Service divers will fix strops to allow for a direct lift of the five-tonne section of wreckage off the seabed at a depth of 40m in a narrow and turbulent channel separating Blackrock island and Parrot rock.

Once divers are safely out of the water, the plan is to deploy the ROV once again from Irish Lights ship Granuaile to monitor it in “real time” with high definition camera.

The first stage in a “two-stage process” will involve a sub-sea inspection by rotating or moving the wreck.

Only after that will a decision be made to retrieve the wreckage to the surface, Mr O’Flynn said.

The Irish Coast Guard has reiterated that safety is paramount. An Achill Coast Guard unit volunteer broke a leg during the early stages of the shore search last month.

Two club divers lost their lives in separate rescue and recovery incidents before — Michael Heffernan during the Belderg cave rescue in north Mayo in October 1997, and Billy O’Connor while searching for the skipper of a fishing vessel off the Wexford coast in 2005. Irish Coast Guard Doolin volunteer Caitriona Lucas lost her life during the search for a missing man off the Clare coast last September.

Food donations for the Irish Coast Guard and Civil Defence shore search crews are continuing to arrive at the local community hall in Eachléim, with businesses in Sligo and school pupils from Holy Family senior national school and Loreto secondary in Swords, Co Dublin among most recent contributors. Searches have been assisted throughout the past two-and-a-half weeks by off-duty rescue agency staff and volunteers from many parts.

The Lost at Sea Tragedies (LAST) group has also offered support. It is chaired by fishing vessel owner Ms Caitlín Uí­ Aodha, whose husband Michael died in the Tit Bonhomme sinking in west Cork in 2012.

Ms Uí Aodha said the fishing industry appreciated the work which the Irish Coast Guard undertook, and also recognised the importance of recovering loved ones.

“The Irish Coast Guard is there for us, and we would like to return this, and also offer any support required to local fishermen who are assisting,”Ms Uí­ Aodha told The Irish Times earlier this week.