Report suggests State-backed mortgage scheme may be out of funds 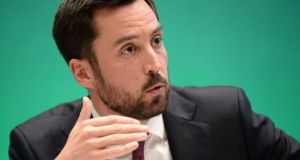 The department of housing “has been advised that no further approvals should issue for now”. Photograph: Dara Mac Donaill

Minister for Housing, Eoghan Murphy TD, is facing calls to clarify the position of the Government-backed mortgage scheme which has allegedly been put on hold because it has run out of funding.

According to RTÉ Radio’s Morning Ireland, which had access to an internal document from the Department of Housing, released under Freedom of Information, further approvals are not being issued for the Rebuilding Ireland home loan.

The briefing note, which was provided to the RTÉ, said the department “has been advised that no further approvals should issue for now”.

The note added that demand had far exceeded expectations and a review is under way.

The Rebuilding Ireland Home Loan was designed to allow first-time buyers to borrow up to 90 per cent of a property’s value from their local authority.

Responding to the story on the Today with Sean O’Rourke show, Fianna Fáil’s housing spokesperson Darragh O’Brien said the Minister needs to give certainty to the people who have applied, who meet the criteria, but have not yet been approved for the loan.

“Clarification is needed. If the money has run out then what is the Minister going to do about it?

“This is about planning.”

The fact that the issue had come to light through a Freedom of Information request was a cause for concern, he added. “That’s not how business in the Dáil should be done. Surely the Dáil and the Housing Committee should have been told.”

He said that first time buyers were being “left waiting on the hook” and asked was the Department “trying to cover up this issue.”

The proper response for the Government should be to provide more affordable housing on State land. “We need more supply and that’s not going to be fixed with low interest loans.”

Mr O’Brien asked “why did we have to find out this way? Of course the service was going to be oversubscribed. Why was this left to the last minute? The Minister needs to clarify what he is going to do.”

He said that the Department of Housing should have been monitoring the level of applications for the scheme which had a fund of €200million which was to be disbursed over three years. However, he said he understood that €107million has been allocated to date.

“I don’t know how many have been approved and are still waiting to get their loans. The Department should have made projections when they saw the level of applications last June.

“No scheme should have a blank cheque. Who is responsible for monitoring this scheme? The Department of Housing should have been planned properly with projections.

“We’re asking for transparency on this process, to let people know if they are going to get their loan. This is a very serious issue. Questions need to be answered. The Minister needs to give certainty to people who have applied.”