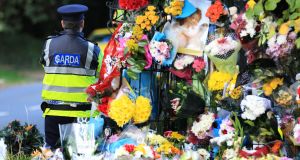 The scene at the site of the fire that claimed 10 lives in Carrickmines in 2015. Eight local councils did not invest any money in housing for the Traveller community last year. Photograph: Nick Bradshaw

Relatives of 10 people and an unborn child who died in a fire at Carrickmines in Dublin have moved back into the halting site which has been redeveloped by Dún Laoghaire-Rathdown County Council.

In October it will be two years since the fire claimed the lives of Thomas Connors (27); Sylvia Connors (nee Lynch, 30) and three of their children, Jimmy (5), Christy (3) and Mary (6 months); Willie Lynch (25) and Tara Gilbert (27), her daughter Jodie Gilbert (9) and their daughter Kelsey (4), their unborn child, and Sylvia and Willie’s brother, Jimmy Lynch (39).

The families asked through a friend on Tuesday that media and others respect their privacy as they prepare for the inquests and become accustomed to living on the site again.

The families are understood to be pleased with the accommodation provided by the council, which consists of homes incorporating living and kitchen and bathroom areas with space for a mobile home.

The family friend described the accommodation as “a proper halting site” adding that the previous accommodation prior to the fire was “temporary for up to seven, eight, or nine years”.

Inquests into the deaths on the site are to resume next month after being adjourned in March to allow gardaí continue their inquiries into the incident.

The fire, which broke out in the early hours of the morning, spread rapidly from caravan to caravan as many of those who died were sleeping.

In the aftermath of the fire the survivors called for an inquiry saying the council had positioned caravans too close together, while a fire hydrant had, they said, been cut off and electrical work had been carried out the day before the blaze.

Local authorities failed to spend more than €1.2 million provided to them by the Department of Housing to build Traveller accommodation last year.

Eight local councils did not invest any money in housing for the Traveller community last year, despite being allocated hundreds of thousands of euro in funding to do so by the State.

Emily Logan, chief commissioner of the Irish Human Rights and Equality Commission, said: “Local authorities should be penalised if they do not spend the total money allocated for Traveller housing in a given year.”

In total, €4.3 million of the €5.5 million provided to local councils to invest in Traveller accommodation in 2016 was spent, according to a Department of Housing review seen by The Irish Times.