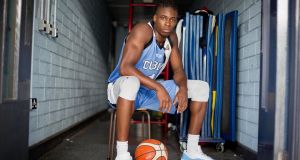 Life for Aiden Harris Igiehon changed when he first picked up a basketball five years ago.

The teenager from Clondalkin, west Dublin, found his love of basketball when he was 12 and his prowess saw the former student of Moyle Park College land a scholarship at the Lawrence Woodmere School in New York last year.

His game has developed while in the US and the teenager now has 33 offers from colleges to play basketball when he graduates, including from St John’s University in New York, one of the most prestigious basketball colleges in the US.

Speaking from the US after a recent visit to Ireland, the 17-year-old said living in America has not changed him and he still loved playing with his former Dublin teammates, the Dublin Lions Basketballers.

“I was born and raised in Ireland and my mother lives in Clondalkin and I was living there until I made the move over last year.

“All this came about was when I first picked up a basketball when I was 12-years-old.

“I just really loved the game from the moment I picked up my first basketball. I went to practice every single day and then I hit a growth spurt,” Aiden told The Irish Times.

The teenager explained that when he was 12 years old he was 5ft 6in tall but the following year he had grown to 6ft 4in.

“I just really shot up and this transcended into the court and that’s when my game really started to develop. I got selected for the Ireland team and my local club The Dublin Lions who I had been training with had organised a trip to the United States.

“I went over there by chance and attended the Philadelphia 76ers camp for the NBA for the younger kids. It’s here that I really blossomed.

“They saw my potential: I was 13-years-old and a 6ft 5in Irish kid and they said ‘wow this kid has form’. It’s really gone from there, “he said.

Sport runs in the Harris Igiehon family. Aiden’s 19-year-old brother Brandon is playing college soccer in the United States and Aiden is hoping to follow in his footsteps in playing at college level in the US

Aiden admitted the move from Dublin to New York was a challenge.

“It was a big transition for me last year when I made the move over and I didn’t settle in right away. Socially, I settled in quickly but the athletic part of this transition was very difficult for me and it’s something I didn’t expect.

“I struggled; I went from being a really good player in Ireland to being a not so good player over here,” he told The Irish Times.

He says a new strength and conditioning regime had changed his game in the past year and gave him the edge to play better.

“I did a lot of strength and conditioning in the past number of months and from this, I have grown even more. I grew from 6ft 6in to 6ft 9in. This has been the biggest transformation for me.

“I put on 10kg of muscle and not even by weights. It was done by pull-ups and now I’m averaging 22 points,” he added.

Now standing at 6ft 10in the Dublin teenager has his eyes firmly focused on playing college basketball in the next two years and his goal is to reach the NBA.

“I’m currently averaging 22 points a game which is good. This summer from say April to July, I went from having three college scholarships to having 33.

“That’s where I’m at right now and it’s pretty exciting. I’m being recruited heavily so it’s very exciting times for a Dublin kid who only picked-up a ball when he was 12. It’s been a rollercoaster few years.”

Harris Igehon spent this summer playing basketball camps in the US but returned home to Dublin for 10 days.

“I got home for a few days and spent most of my time in the Dublin Lions, I love coming home. My mom loves when I come home. It brings a tear to her eye. She knows how much I want this.”

The 17-year-old lives with his aunt and Uncle in New York and said “this is my dream and I want to make the NBA so I have to work even harder this year. School is fun but basketball is my life”.

No research on impact of fake news on vaccine uptake, conference told