As storm Emma moves into Ireland, Dublin streets, though quieter than usual, still have their share of joggers and dog walkers. Video: Enda O'Dowd 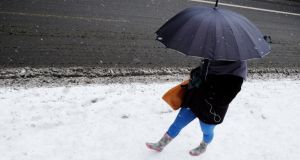 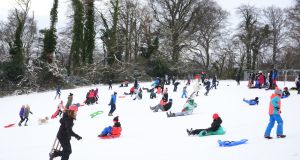 Hundreds of people took to the ’slopes’ in Bushy Park, Terenure, Dublin on sleighs, sledges and dustbin lids to slide on the snow. Photograph: Bryan O’Brien 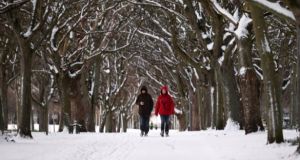 Met Éireann has issued its highest level weather alert for the entire State as a severe winter storm is set to bring blizzard conditions and snow drifting across the country.

The forecaster had issued a red weather alert for Munster and Leinster but later applied the warning to the whole country night and increased the period of time covered, saying “further heavy snow showers will bring accumulations of significant levels with all areas at risk”.

The red alert runs from 11pm on Wednesday until 3pm on Friday.

Authorities had urged people in areas covered by the warning to remain indoors on Thursday and into Friday in light of the most severe snowy conditions for decades being forecast to arrive.

A red alert is a rare event, according to the forecaster. On its website it says: “The issue of red level severe weather warnings should be a comparatively rare event and implies that recipients take action to protect themselves and/or their properties; this could be by moving their families out of the danger zone temporarily; by staying indoors; or by other specific actions aimed at mitigating the effects of the weather conditions.”

In its forecast, Met Éireann said: “Blizzard conditions will develop from the south Thursday afternoon and evening as heavy snow and strong easterly winds bring snow drifts northwards over the country.

“Eastern and southern coastal counties will be worst affected.”

Schools across the State have been closed in advance of “almost unprecedented” dumps of snow, with up to 40cm forecast to fall by lunchtime on Friday.

Curtailed rail and Luas services were scheduled to cease from about midday on Thursday but transport providers would be expected to change their plans to reflect the updated advice from Met Éireann.

The freezing conditions that took hold on Wednesday will deteriorate further as Storm Emma moves from southern Europe and meets polar air moving in from eastern Europe, bringing heavy snow and winds of up to 100km/h.

“Our message is clear,” said Seán Hogan, chairman of the National Emergency Co-Ordination Group on Wednesday, “the storm is coming”.

Temperatures are forecast to fall to as low as minus 7 degrees on Thursday.

People in Leinster and Munster, the initial status red areas, had earlier been urged not to drive as visibility could reach zero but the weather warning has now been extended to all counties. Mr Hogan said any decision to take to the roads would be “suicidal”.

Businesses have been asked to consider the viability of opening and the safety of staff making their way to work. Court sittings across the State have been cancelled on Thursday and Friday.

Taoiseach Leo Varadkar sought to reassure the public that full State resources have been dedicated to deal with any fallout.

“We have not experienced blizzard like conditions like this since 1982. But the reports from that time remind us of the serious and life-threatening conditions that can be posed by heavy snow and strong winds when they come together.”

Minister for Transport Shane Ross said the “drama of the situation” was best underlined by expectations of 25cm of snow falling on Thursday and a further 15cm by lunchtime Friday. He said it was “an almost unprecedented situation”.

Hundreds of flights were cancelled on Wednesday and people planning to take flights from the State’s airports on Thursday are advised to check with their airline to see if schedules are operating.

The HSE advised those with hospital or other healthcare appointments to contact facilities and confirm scheduled services before making unnecessary journeys.

The Children’s Hospital Group, which includes Temple Street, Crumlin and Tallaght, has cancelled admissions and outpatient appointments for the two-day duration.

Minister for Housing Eoghan Murphy said conditions in Leinster and Munster would considerably decline on what was experienced earlier in the week. “This is a significant escalation in the weather event. We will see blizzard-like conditions and zero visibility. This is not weather people should be out in,” he said.

The Defence Forces are on standby to deal with emergencies. Businesses have been urged to heed the weather warnings. However, trade union Mandate criticised a number of unnamed retail companies that allegedly told employees they would not be paid for missed hours.