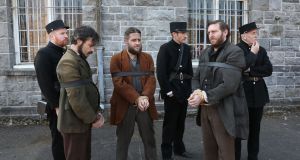 Grubby white hood over each head, noose around each neck, three men stood shivering on a Galway city gallows.

No longer able to shade their eyes under a hot midday sun, the men had arms strapped, wrists bound and legs pinioned by their hangman.

“I was not there that night ... I had not a hand or part in it ... I’m as innocent as a child in the cradle,” one of the three, Myles Joyce, had roared in an impassioned appeal as he was pushed up the steps.

Not a falling pin could be heard as he continued in Irish, slightly gasping.

“It is a sin to take the life of an innocent man.. Jesus Christ was unjustly crucified as well... I have my priest with me,” he cried.

Almost 135 years after the event, Joyce’s words, now uttered by actor Dara Devaney, still struck a chill cord as they echoed across the courtyard in Galway’s Dún Uí Mhaoilíosa barracks.

The Irish-speaking Army base in Renmore had been chosen as the set for an execution on Tuesday, as part of a drama documentary on the Maamtrasna murders which is being made by the ROSG film company for TG4.

Murdair Mhám Trasna, as it is called, focuses on the fate of Myles Joyce and seven other Connemara men who had been arrested after a family of five were killed in 1882 in the Maamtrasna valley.

The subsequent investigation, arrests, trial and execution of three of the eight outside Galway Gaol is still regarded as a miscarriage of justice which has prompted two members of the British House of Lords to campaign for an apology. Informer Tom Casey subsequently admitted that all eight men had been convicted on perjured evidence.

Not only was Myles Joyce innocent, but his death, by hangman William Marwood from Lincolnshire, was more brutal than it should have been.

An Irish Times journalist recording the event reported that “it soon became evident, from Marwood’s behaviour, that there had been a hitch”.

It transpired that Joyce had taken several minutes to die, according to author Seán Ó Cuirreáin, whose account of the events, entitled Éagóir, was published by Cois Life press last year.

TG4 subsequently commissioned a drama documentary from ROSG film company, with support from the Broadcasting Authority of Ireland, which is directed by Colm Bairéad and produced by Ciarán Ó Cofaigh.

Joe Condren of Total Stunts said the stunt actors for the hanging scene were protected by a harness and a wire woven into the rope. Each noose has a quick release, in case the three stunt crew – Robbie O’Brien, Rachel Walker and Ryan Craig – should accidentally fall. They also had their hands free for the same reason, he said, and plenty of padding to break their exit through the gallows trapdoor.

The five men who got a reprieve spent 20 years in prison, and on the day of their release they were sent by train from Portlaoise to Dublin and then to Ballinrobe, Co Mayo.

“They walked home some 18 miles across the mountains in the dark and the rain,” Ó Cuirreáin says.” It was the final humiliation for a crime they did not commit.”

Murdair Mhám Trasna will be broadcast by TG4 within the next year.