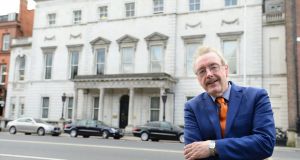 Ray Bassett: It is time for the EU to ‘stop the insults’. File photograph: Dara Mac Dónaill

Former senior Irish diplomat Ray Bassett has warned that Ireland is on the “wrong track” in Brexit negotiations and says the European Union should stop insulting the UK, as humiliation is counterproductive.

Speaking on Saturday at a “Making Sense of Brexit” symposium in Belfast, organised by the Irish Association, Dr Bassett, who retired from the Department of Foreign Affairs last year after 39 years of service, said Ireland should have no interest in teaching the British a lesson; rather, it has an interest in making Brexit a success.

He said it is time for the EU to “stop the insults” and pointed to the good exchange of information between Britain and Ireland in the build-up to the 1998 Belfast Agreement.

“Seamus Mallon said in the negotiations, ‘Always make sure the other guy gets up with his trousers on’,” Mr Bassett said.

“It is not in your interest to insult or defeat the other person and there is too much of that at the moment in the negotiations.”

Dr Bassett says the Irish Government should demand no physical border in Ireland, and should also insist that the talks move on to trade and economic matters and that the UK’s exit bill be sent for international arbitration.