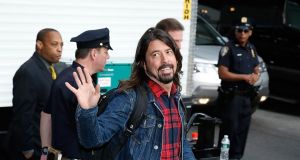 Music fans going to Slane Castle for the Foo Fighters concert have been warned to bring their rain gear.

Heavy rain is forecast across the country on Saturday night as the unsettled weather of recent days continues.

Met Éireann forecaster Willemien Phelan said Saturday evening and night is looking “very wet” for the concert, but it will also be mild.

Saturday will see the highest temperatures of the weekend at between 13 and 16 degrees.

She warned the heaviest rain is forecast for the end of the concert, between 9pm and 12am.

Friday will see heavy showers across the country, with good sunny spells.

Saturday will start off dry and mild with sunshine in the east, but rain is forecast to reach western counties and spread across the country in the evening.

The bank holiday weekend is one of the biggest for outdoor events this year.

In addition to the concert at Slane Castle, there are four major music festivals: Forbidden Fruit at the Royal Hospital Kilmainham; the Life Festival at Belvedere House in Co Westmeath; the Salmon Leap Festival in Leixlip, and Down With Jazz at the Meeting House Square in Dublin.

Down with Jazz marks the 80th anniversary of the notorious Dance Hall Act (1935), which effectively banned jazz clubs from Ireland.

Forbidden Fruit has emerged as the biggest of all the urban festivals in Ireland.

It runs for four days and will have Fatboy Slim, Wu Tang Clan, Richie Hawtin and Patti Smith as headliners. Smith will play her celebrated album Horses in its entirety on the bank holiday Monday.

Nas will be the big attraction at dance event the Life Festival, which takes place over eight stages on the 160 acres of lakeside parkland.

An older demographic will be catered for at the The Salmon Leap Inn in Leixlip, featuring Luka Bloom, Eddi Reader, Altan, Damien Dempsey and Mundy.

Bloom festival is also on this weekend in the Phoenix Park. Attendance at the biggest garden festival in the country is expected to surpass the 106,000 people who paid in last year.

Bank holiday Monday’s big event is the Vhi women’s mini-marathon through the streets of Dublin.

It will be wet and windy at times, with temperatures below normal for the time of year.