Ibrahim Halawa has been imprisoned without trial in Egypt since August 2013, just over four years later he has been acquitted of all charges. 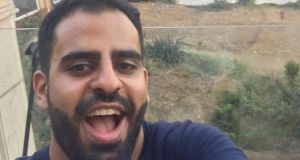 Ibrahim Halawa seen after he was freed from jail on Thursday. The Irish man has been issued a new Irish passport and is expected to return home within days.

Ibrahim Halawa should be home in Ireland within days following his release from a Cairo prison last night, Minister for Foreign Affairs Simon Coveney has said.

He said several formalities must be dealt with before Mr Halawa can leave Egypt.

The end to the 21-year-old’s imprisonment came a month after an Egyptian court found him not guilty of several charges.

Ibrahim Halawa, from Firhouse in south Dublin, is the son of Hussein Halawa, the imam of the Islamic Cultural Centre of Ireland in Clonskeagh.

He was held for four years on charges relating to a Cairo protest in August 2013 following the ousting of then president Mohamed Morsi of the Muslim Brotherhood.

The Dubliner was one of 453 defendants in the mass trial which drew criticism for lengthy delays.

Mr Coveney said Ibrahim Halawa will return home on a commercial flight rather than on the government jet as has been previously suggested. He said this is the quickest way of getting him home and is what his family would prefer.

Ibrahim Halawa has been issued a new Irish passport but it does not have an immigration stamp. To get one he will have to attend the Immigration Ministry in Cairo in person.

However, it is now the weekend in Egypt.

Great news coming out of Cairo. #IbrahimHalawa is free✊ 4 years of illegal imprisonment but now focus is on getting him home #FreeIbrahim

“We are working to get him home as quickly as possible,” Mr Coveney told RTÉ’s Morning Ireland. It is hoped he may return either on Sunday or Monday.

The Minister added he hoped to speak to Ibrahim Halawa by telephone this morning.

He said the release of the Dublin man was a huge relief to the Government and to his family.

“He is now in a safe, private, comfortable location in Cairo.”

Mr Coveney said the Ambassador had told him Ibrahim Halawa was tired but elated. He was hugely relieved and in great form.

“He just wants to get on with his life. He doesn’t want to make a circus of it.”

Responding to a query why the Australian government managed to get journalist Peter Greste released far more quickly, the Minister said the cases were different.

Ibrahim Halawa’s trial took a long time to conclude and there had been no way of getting him released until the trial concluded.

He said 20,000 consular hours had been spent on the case, far more than on any other case in history.

“This issue has been part of every conversation with our Egyptian counterparts for the past four years. Ibrahim is an Irish citizen. His case was to the fore in all conversations. It made it difficult to focus on other things we should have been doing with Egypt.”

Mr Flanagan said Mr Halawa’s case had got more attention than any other in recent years.

Ibrahim Halawa’s sister, Fatima, told The Irish Times, how she learned of her brother’s release last night when she heard her father speaking loudly on the phone. “Suddenly he was rushing up the stairs and we realised he was talking to Ibrahim.

“Then I came out of the room and asked ‘is Ibrahim out?’ and he said ’yes. Then he gives the phone to me and we talk very briefly because the phone has to go around to everyone else,” she said.

“It will be welcomed by all those who were concerned for him in his long ordeal of imprisonment. I wish Ibrahim Halawa well on his journey home,” Mr Higgins said.

“I’m really, really delighted to hear to hear that Ibrahim Halawa has been released from prison,” Mr Varadkar said.