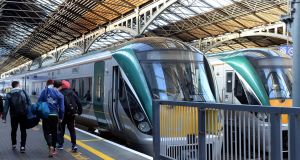 Unions, including the National Bus and Rail Union and Siptu will ballot immediately for strike action. File photograph: Eric Luke/ The Irish Times

Rail passengers could face serious disruption in the weeks ahead as a result of a dispute between unions and management at Iarnród Éireann over pay.

Unions at the State-owned rail operator are to ballot about 4,000 staff in the company for strike action after talks with management broke down on Wednesday night after nearly 12 hours.

Pay increases of 3.75 per cent annually without any additional productivity concessions - similar to rises secured by staff at Dublin Bus and Luas after strikes last year - had been sought by trade unions.

However, staff representatives said Iarnród Éireann management had proposed increases of 1.5 per cent which were linked to staff support for a number of reforms including outsourcing and some rail line closures.

Union leaders maintained the management proposals amounted to asking staff to fund their own pay rises and that this was unacceptable.

Management said it had discussed a myriad of items with the unions but could not meet the expectations of staff, particularly in light of the company’s €160 million of accumulated debt.

He said staff at the company had not received any pay increases in nearly a decade.

He said the company’s pay offer was linked to staff support for a list of 18 items including live closures, outsourcing, reduction of contract hours and forced re-deployment of workers.

“We came here today seeking a flat, no-strings attached pay rise and this company has treated staff representatives scurrilously over the last 12 hours (in the talks),” he said.

Mr Ennis said ballots for industrial and strike action at Iarnród Éireann would now take place over the coming weeks.

“We came to do business and we made it clear to everyone today was the 11th hour. On that basis we will proceed with our ballots,” he added.

Union leaders suggested any industrial action could take place in about a month, perhaps around the time of the October bank holiday weekend.

Mr Ennis said the nature of any industrial action would be determined by union strike committees after the process of balloting members was complete.

He said staff would no longer subsidise the company which had experienced severe cuts in State funding.

Mr O’Leary called on the Government and the Minister for Transport Shane Ross to intervene.

Ciaran Masterson, Iarnród Éireann’s director of human resources , said the company had put forward a myriad of proposals but could not meet the unions’ expectations.