Questions around Irish unity referendum to be examined in new initiative 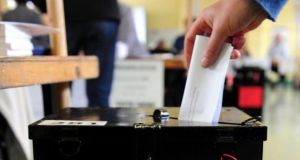 ‘Regardless of their preferences, policymakers and the public in both jurisdictions should be well informed.’ Photograph: Aidan Crawley/Bloomberg/ File

A major academic initiative to avoid the pitfalls of the Brexit vote when it comes to a future referendum on Northern Ireland has been launched.

The Analysing and Researching Ireland North and South (Arins) programme is a joint project by the Royal Irish Academy and the University of Notre Dame.

It is seeking to examine the question of an Irish unity referendum from an economic, social and political perspective and to produce papers which will form part of a public discussion about it.

The Arins project is being launched with opposing editorials, one by political scientist Prof Brendan O’Leary advocating unity, the other by Prof Peter Shirlow, director of the Institute of Irish Studies in Liverpool, advocating for the constitutional status quo to remain. Both were published in The Irish Times and the Belfast Telegraph on Monday.

Arins project editor Prof John Doyle said opinion polls in Northern Ireland show a majority of nationalists in favour of a united Ireland following Brexit and polls tightening on the issue across the North.

While a majority in the Republic have always been in favour of unification, it has never featured in the top 10 most important issues until now, he adds. Private polling carried out by Fine Gael and Sinn Féin before Christmas show it ranking now as the second or third most important issue.

He says the Arins project will take a neutral stance on whether unity is a good thing or a bad thing. By examining practical issues of concern relating to unification, it hopes to avoid the pitfalls of the Brexit “disaster” where people were unsure about what they were voting for.

Academics have been commissioned to produce work on such subjects as the British subvention to Northern Ireland and how it will be replaced, the future of a devolved assembly and the creation of an all-Ireland health service.

This new initiative is being launched against the backdrop of the United Kingdom’s withdrawal from the European Union and a clamour in Scotland for a second referendum on independence.

Prof Patrick Griffin of the University of Notre Dame said he hoped the research would help “the conditions for better quality debate and decision-making. Regardless of their preferences, policymakers and the public in both jurisdictions should be well informed.”

Papers on such issues as unionist identify, cross-border co-operation in health and the Northern Ireland protocol will be published in the Irish Studies in International Affairs and made freely available to the public.

All articles will be free to access online at www.arinsproject.com. Each article published will be accompanied by at least one response, often from a different standpoint.

Covid-19 patients in hospital remain at high levels as lockdown extension expected 11:55
Everyone in Ireland to get Covid-19 vaccine by September, Minister for Health says 11:54
Inspector who highlighted mother and baby homes to be remembered through scholarship 11:07
Mandatory travel quarantine should be introduced by Ireland, experts urge 09:58
Temperatures set to plunge to -4 degrees, bringing risk of snow 09:01