Quaker memorial site to be unveiled in Waterford 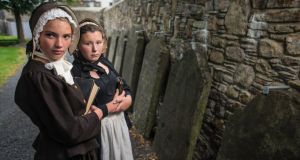 The contribution of the Quakers to life in Waterford is to be remembered this weekend with the unveiling of a memorial at the site of the first Quaker burial ground in the city.

The memorial, created by Waterford City and County Council, will be unveiled at John’s Lane in the city centre by Waterford mayor Lola O’Sullivan at 11am tomorrow as part of National Heritage Week.

Designed by architects Wigham McGrath and Partners, it includes a landscaped area and an angled wall bearing the family names of those buried in the graveyard

The memorial has been warmly welcomed by Joan Johnson of the local Quaker community.

“Both the original burial site at John’s Lane and a later burial ground at Wyse Park had been given over to the city council by the Society of Friends by the 1950s,” she said. “Many local residents still have happy memories of the playground that was created there.”

Ms Johnson, who has written about the history of the Quakers in Waterford, said Quakers first arrived there in the 1650s and opened their first meeting house in 1694.

Ms Johnson said that, although Quakers only made up 2 per cent of the Waterford population, they played a major role in the economic and business life of the city. Some of its best-known 18th and 19th century industries were established by Quakers, including Jacobs who made their first biscuits in Waterford in 1851.

Other prominent Quaker families included the Strangmans, who set up a brewery in the city in 1722, and the Penroses who founded the Waterford glass works in 1783.

The Quaker legacy continues today with Newtown School which was built on the ancestral home of Sir Thomas Wyse who married Napoleon’s niece Laetitia in 1821.