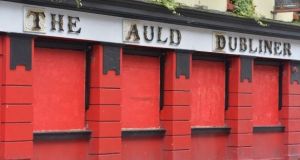 Ireland may need to consider reopening pubs on a county by county basis depending on local coronavirus threat levels, Mike Ryan, executive director with the World Health Organisation has suggested. Photograph: Alan Betson / The Irish Times

Ireland may need to consider reopening pubs on a county by county basis depending on local coronavirus threat levels, Mike Ryan, executive director with the World Health Organisation has suggested.

As the Cabinet meets to discuss whether the country will proceed to phase four of the so-called roadmap to reopening society and business, Mr Ryan said it faces a “very difficult decision”.

The government will have to weigh up the risks of people gathering in “poorly ventilated, crowded places where people may reduce their social distancing and let down their guard” against the ability to manage transmission rates in pubs and bars.

“It is a balance and depends on people’s behaviour and how they adapt,” he said.

Suggesting a potential localised lockdown system, Mr Ryan said it “may be where there is localised community transmission, localised measures may have to be taken.”

“You can use a much more localised strategy – by county, by province, whatever it is in the Irish context – but to do that you need very localised data and a localised response capacity,” he said.

Mr Ryan said such a system to contain the spread of Covid-19 would also require the ability for a rapid response to local outbreaks, with quick testing and investigation of clusters.

But he added that there was a limit to how localised measures can be in a small country in Ireland where people are moving about between areas of differing risk.

“Quite frankly, there are no correct answers. Everyday it changes and the government must remain flexible,” he said.

Mr Ryan also warned that anticipated pre-travel testing of passengers arriving into the country “is not a panacea” against imported cases of the virus.

“If I am tested today and I’m negative, I may have been exposed three days ago and I’m incubating the virus,” he told RTÉ’s Today with Sarah McInerney.

Testing ahead of travel will take out some positive cases but wouldn’t detect them all, however the government needs to manage a compromise between the health and economic risks to the country when making its decisions, he added.

There have been over 1.5 million registrations of the Covid tracker app in Ireland since its launch.

Mr Ryan also appealed to younger people to play their part in combating the spread of the virus.

While most data suggests children under the age of 10 are not transmitting the disease as effectively as others, teenagers are passing it on in a similar way to older adults.

International evidence shows the behaviour of these younger people is contributing to the spread of the disease either getting better or worse, he cautioned.

“We know what drives transmission of this virus and we know the consequences of not stopping that transmission,” he said.

“What we need to do is get to a point where we can pick up the flares ups and small outbreaks quickly - and they will happen, in some sense, they are inevitable.

“The test is how quickly do we react, and can we in some way snuff out those small clusters before they affect the whole community. We do not want to get back to full blown community transmission where everyone has to stay at home or people have to reduce contact to nearly nil.

“We can sustain a new norm if we all do what we need to do.”

Mr Ryan said caution will be vital over the coming months.

While it was an “incredible achievement” that there are 26 potential vaccines in “full blown trials” - six of which are in phase three trials, being testing on populations - just seven months into the pandemic “we have to be patient, we have to make sure those vaccines are safe and effective”, he added.

Mr Ryan said a good vaccine would drive down transmission and reduce deaths “but it may not be the silver bullet”.

“It may not be the complete answer. We may have to sustain the public health measures,” he said.