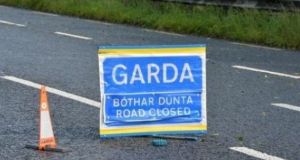 Firefighters are fighting to bring a blaze on the main Cork-Waterford road under control after a diesel tanker caught fire near Carrigtwohill early this morning.

Firefighters are fighting to bring a blaze on the main Cork-Waterford road under control after a diesel tanker caught fire near Carrigtwohill early this morning.

The blaze broke out on the tanker around 5.30am this morning between Cobh Cross and Little Island on the N25 and units of the Cork County Fire Service from Cobh and Midleton responded.

According to AA Roadwatch, traffic remains extremely heavy from before Junction 4 at Carrigtwohill heading westbound while there are also huge tailbacks on the Cobh Road, R624.

This morning’s fire in the second major incident on the N25 in Co Cork in the past week and follows the death of an elderly woman in hospital following an unrelated car crash near Killeagh last week.

The 94-year-old woman was airlifted to Cork University Hospital on Friday following a three car collision at the entrance to a filling station at Burgess between Killeagh and Youghal on July 31st.

The woman, who was a passenger in one of the vehicles, suffered serious injuries in the collision and she lost her fight for life and passed away at Cork University Hospital on Sunday, August 2nd.

A man, aged 46 and a woman, aged 27, were also injured in the collision which happened at 4.30pm on July 31st and were taken to hospital for treatment but have since been discharged.

Gardaí are appealing for anyone who was travelling on the N25 at Burgess between 4pm and 4.30pm on Friday 31st July and may have witnessed the collision to contact them.

They are particularly anxious to speak with any road users who were in the area and have dash cam footage and they can be contacted at Midleton Garda Station on 021 4621550.