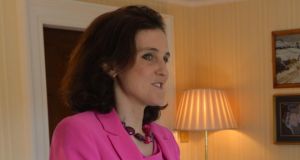 The report into the on the runs controversy which had threatened the future of the Northern Executive is to be published on July 17th, the Northern Secretary Theresa Villiers has announced. Photograph: Aaron McCracken/Harrisons/PA Wire.

The report into the on the runs controversy which had threatened the future of the Northern Executive is to be published on July 17th, the Northern Secretary Theresa Villiers has announced.

The inquiry into the British government scheme for dealing with so called republican on the runs was carried out by Lady Justice Hallett after the collapse in February of a case against Donegal man John Downey. He was accused of involvement in the 1982 Hyde Park bombings in which four British soldiers were killed.

British prime minister David Cameron asked Lady Justice Hallett to conduct her inquiry after First Minister Peter Robinson threatened to resign over the issuing of comfort letters to more than 200 republicans telling them they did not face prosecution for paramilitary offences. At the time, there was concern the issue could destabilise the powersharing administration at Stormont.

The House of Commons Northern Ireland Affairs Committee is also investigating the scheme.

The case against Mr Downey was halted after it emerged that he had mistakenly received a comfort letter saying he wasn’t wanted for questioning on any IRA offences. Unionist politicians complained that they were kept in the dark about the on the runs scheme while Sinn Féin politicians said the matter had been raised at the Policing Board and they should have been aware.

Lady Justice Hallett was due to report by the end of this month but her investigation was delayed. Ms Villiers has now announced the publication date of July 17th.

The timing of publication is having a bearing on the talks on the three Haass issues that are due to start next week. The DUP and the Ulster Unionist Party, while saying they will discuss flags and parading, insist they will not talk about the past until they have seen Lady Justice Hallett’s report.

Meanwhile, Ian Paisley Jnr, the DUP MP for North Antrim, has called on the British government to set aside parliamentary time “if necessary” to bring in legislation annulling the on the run letters.

“I want there to be no doubt about the value of these letters. Legislative annulment would put the situation beyond any doubt,” he said. “There must be no repetition of the hurt and insult to victims and the wider community in Northern Ireland who have been so outraged at this secret deal between Sinn Féin and the previous direct rule (Labour) government.”