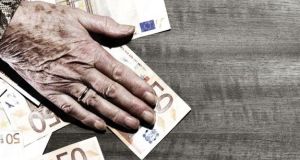 The State is set to pay out about €3.1 billion in pensions and retirement payments to former public servants next year.

The forecast, which is set out in the Government’s 2018 expenditure report, suggests pension costs for former civil servants, teachers, gardaí, nurses, doctors and other health staff as well as military personnel will next year return to a level last seen in 2012.

The budget documentation shows that the bill for pensions of retired Defence Forces members will be nearly €240 million or almost half the cost of paying serving military personnel.

Separately an internal analysis carried out last May by the Department of Public Expenditure warned that the pension costs for the HSE could reach more than €1 billion by 2020.

It said while the estimated gross HSE pension bill of nearly €880 million for this year “appears manageable” in the short term, the health authority needed to start considering how it would manage this cost going forward to ensure that it did not impact on outcome for patients.

The Budget 2018 documentation also suggests that the pensions bill for about 46,000 retired teachers and others in the education sector will be nearly €1.2 billion next year.

The Department of Education received funding this year to cover about 850 staff retirements. It warned in ministerial briefing papers earlier this year that if the number of retirements continued to increase at the current rate, it would not be in a position to meet these costs within the allocation provided.

Overall there are a number of different pension arrangements in place in the public service – with the more recent 2013 initiative less advantageous than others. They are in general defined benefit schemes which guarantee a set pay out on retirement.

The Government has argued that reforms to be introduced as part of the new public service agreement will make the cost of paying pensions for retired State employees more sustainable in the future. Under the deal the pension levy which was introduced as a temporary financial emergency levy in 2009 is to converted into a permanent contribution. Those with accelerated pensions such as gardaí and military personnel benefitted least from the provisions of the accord.

Unlike in the private sector, where defined benefit schemes are becoming increasingly rare, the public service pension arrangements are unfunded. The costs are met by the Government from general taxation as costs arise on what is known as a “pay as you go basis”.

Retired public servants in general receive a lump sum of 1½ times their annual earnings on retirement in addition to a pension of half their final salary. Staff appointed since 2013 have a less generous scheme which is based on career average payments.

The budget allocated €239 million to meet the cost of providing benefits for about 12,300 military pensioners including spouses and children of deceased personnel.

A Department of Defence submission to the government’s comprehensive review of expenditure in 2014 maintained that gross expenditure on military pensions increased by 30 per cent between 2007 and 2012.

Ministerial briefing papers drawn up in June by the department suggested that the official “vote” to cover Defence Force pensions has been under-funded over recent years.

“This is essentially because the amounts originally provided in those years were not sufficient to meet the costs that transpired. In 2016, a supplementary estimate of €11 million (approx 5 per cent of the original allocation) was required.”

The department indicated it largely met any pension shortfalls from corresponding savings on the defence budget such as pay savings that arose from the gap between retirements and the recruitment of replacement personnel.

The department said there were “particular difficulties that are unique to the Defence Forces in terms of predicting retirement and turnover patterns, and which can contribute to greater than expected expenditure in any given year”.

“This is due, amongst other things, to the availability of the early payment of pension benefits immediately on retirement after relatively short periods of service, and regardless of age. Members of the Permanent Defence Force (PDF) have earlier pension accrual for operational and manpower policy reasons.”

The Department of Public Expenditure analysis maintained that between 2013 and last year, an average of about 3,000 people retired from the HSE each year.

It said the amount the exchequer paid towards HSE pension costs varies depending on the level of income it received in superannuation contributions and income generated by the public service pension levy.

It said that for technical reasons the income the HSE received from these sources had been decreasing and would continue to do so in the future.