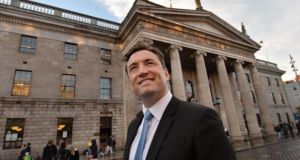 John Concannon is the director of the Strategic Communications Unit. Photograph: Alan Betson

Taoiseach Leo Varadkar told the Dáil he did not appoint the head of the Government’s new Strategic Communications Unit but he did approach and ask him if he was available for the role.

In an apparent slip of the tongue, however, Mr Varadkar went on to say; “I discussed it with the secretary general obviously before I appointed him as ... or before I ...or before I asked if he would be available to be appointed.”

Mr Varadkar was defending the controversial unit, which the Opposition dubbed as the Government’s “spin department”. The Taoiseach insisted it would be cost neutral despite the €5 million cost because “it would be mostly for information campaigns” and was fully funded from his department’s existing administrative and information budget.

Fianna Fáil leader Micheál Martin asked why the unit’s director John Concannon and deputy director Andrea Pappin were not appointed through rules governing special advisers, used when an established civil servant is appointed to a role by a member of Government.

He said it was “essentially a propaganda unit designed to sell a political message on behalf of the Government”.

Labour’s Jan O’Sullivan also criticised the unit. She said the €5 million “seems likely to only fund more of the Facebook and Twitter-type advertisements with political messaging that we witnessed from your Department yesterday along with some odd videos of the Minister for Finance arriving at each of his appointments”.

Mr Martin said “the appointment of the head in itself was a political act by you, Taoiseach”. He said there were important issues about the politicisation of the Civil Service “which must be avoided at all costs”

Mr Varadkar said they published the details of the cost to be transparent and over time it would save money because they would be able to “reduce the number of information campaigns and activities by other Government departments and the very high number of State agencies that have their own independent communications function and perhaps don’t need it at all”.

He said “Mr Concannon wasn’t appointed by me. I approached him and asked him would he be available. He was appointed by the secretary general of the department.”

He also said the same applied to Ms Pappin who was an existing staff member in the department doing other communications.

But Mr Martin accused the Taoiseach of being “a bit disingenuous”. He said Mr Varadkar contacted Mr Concannon and asked if he was available for the job “and miraculously without you saying to the sec gen (secretary general), the sec gen came to the same conclusion to appoint him.”

“You appointed Mr Concannon, not Mr (Martin)Frasier, the secretary general. He was told to appoint him.”

The Fianna Fáil leader said the unit was no longer separate from the GIS (Government Information Service). “It’s taken over essentially strategically, the work of the GIS and it’s a very dangerous development.”

Mr Varadkar said Mr Concannon invented and led the Gathering, a festival which attracted huge numbers of the Diaspora to Ireland. He also led the highly successful 1916 centenary commemorations and was approached to lead Creative Ireland. “It is exactly the same thing that would have happened with Creative Ireland and the 1916 commemorations,” the Taoiseach said.