Protesters gather outside Garda station in wake of Dublin shooting

A demonstration has been held outside of Pearse St Garda station following the fatal shooting of George Nkencho in Clonee, west Dublin. Video: Ronan McGreevy 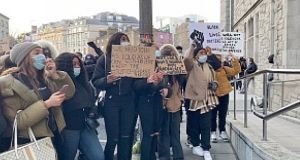 The crowds chanted “Black Lives Matter” and “George Nkencho’s not a thug” on the steps of the station following a protest at the Spire in O’Connell Street.

It is the second such protest since Mr Nkencho (27) was shot dead by members of the Blanchardstown Garda Armed Support Unit (ASU) on Wednesday in west Dublin. He allegedly brandished a knife and threatened officers. A protest was also held on New Year’s Day outside Waterford Garda station.

Video footage taken by a passerby, which showed a man in a blue jumper surrounded by ASU members, captured the sound of an initial gunshot followed by four more discharges.

The man appears to stumble before falling to the ground on the fifth round fired. At least three rounds hit Mr Nkencho who received first aid at the scene and was taken by ambulance to James Connolly Memorial Hospital where he was pronounced dead.

Protester Richard Oyewole said African people in Ireland wanted to know why gardaí shot him dead when he did not have a gun. “People want justice,” he said.

Earlier at the Spire, protesters lit candles in honour of Mr Nkencho whose family said he had mental health problems.

One protester told the crowd that black people had to stand up for themselves.

“They don’t care about us. They don’t care about black people. We are going to have to . . . protect ourselves,” she said. “George did not have to die the way that he did . . . [HE]was a black man living in this country. He wasn’t treated like he was an Irish citizen. He was shot five times in front of his house.”

The killing is being investigated by the Garda Síochána Ombudsman Commission.

A fundraiser set up to pay for Mr Nkencho’s funeral has raised the €15,000 needed to bury him.