Private funeral of Ian Paisley held in Co Down 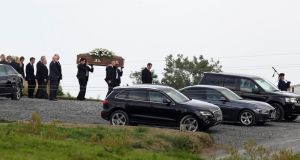 The coffin of Ian Paisley, the former Democratic Unionist Party leader and first minister of Northern Ireland, is carried to his grave at the Ballygowan Free Presbyterian Church in Ballygowan, Northern Ireland today. Photograph: Reuters

As the funeral of Ian Paisley was taking place today, political leaders from across the divide paid tribute in the Northern Assembly at Stormont to the former First Minister and DUP leader. There was general political consensus in the Assembly chamber this afternoon that “his like will never be seen again”.

At his own request his funeral service in east Belfast and his interment in Co Down was a private family affair. It was therefore for representatives of all the parties - the DUP, Sinn Fein, the SDLP, the Ulster Unionist Party, Alliance the Traditional Unionist Voice party, the Greens, the UK Independence Party and NI21 - to avail of Stormont to recall a leader who from the 1960s made his mark over six decades in politics.

Ukip Assembly member David McNarry recorded a simple truth when he said, “Without Ian Paisley saying yes and embracing powersharing, this Assembly would not be here today and we would not be in a position to be paying this tribute.”

His successor as First Minister Peter Robinson said in Northern Ireland Dr Paisley “provided firm and decisive leadership when it needed it most and when it lacked it most”. He said Dr Paisley was the “undisputed leader of unionism” and that he “outclassed all around him”.

“In the storm he was oak and granite. In the sunshine he radiated passion and commitment,” said Mr Robinson. He said he delivered his message with clarity, certainty, strength and conviction.

He said he loved Stormont and was a man who could “energise and inspire” people. He had a “sincere interest in people’s problems no matter who they were, no matter whether their problems were large or small”. Since his death, politics seemed “a little less colourful and exciting”.

“Ian Paisley was a remarkable man, whose long career in public life has left an indelible mark upon all of us who knew him,” he added. He had “taken his place in the chronicles of Ulster history, alongside the greats of unionism”.

Mr Robinson offering sympathy to the Paisley family said he was “blessed” to have his wife of almost 58 years, Eileen alongside him throughout his career.

The Sinn Fein Deputy First Minister Martin McGuinness said Dr Paisley’s decision to enter into the powersharing Northern Executive in the spring of 2007 “confounded the international community who had arrived en masse to proclaim yet another glorious failure in the peace process”.

He recalled as an18 or 19-year-old hearing Dr Paisley’s “booming voice” in Derry and being “in fear of Ian Paisley”.

He jumped forward to 2007 and that said one of the “most memorable experiences” of his life was that from the very outset “we hit it off... and grew to like each other” in their time as First Minister and Deputy First Minister. “In doing so we confounded the world which was a good thing.”

Looking to the current political divisions at Stormont, Mr McGuinness said “his ability, coming from where he came from, to bridge the differences with me” should be “food for thought... for every single member of this house”.

The SDLP leader Dr Alasdair McDonnell said while he could never agree with much of Dr Paisley’s politics, he was a “committed constituency representative and dedicated public servant”. He offered his sympathy to the Paisley family and also to the DUP.

The Ulster Unionist Party leader Mike Nesbitt said Dr Paisley was a “huge figure physically and metaphorically”. He said however that today was not the day to reflect on his legacy, that there would be plenty of time for such reflection. But Mr Nesbitt remembered his previous career as a journalist and the times reporting on Dr Paisley.

“Interviewing Ian Paisley was always something of an event. If you were not admonished you could not consider yourself a proper journalist,” he said.

Alliance leader David Ford said many people would disagree with many things Dr Paisley did. That element of his past should not be brushed aside. Some historians might judge him as a man who spent 40 years saying no and finally two years saying yes. But when he did the deal and became First Minister in 2007 he “played his part” in ensuring that a “working Assembly” was created.

In paying respect to him politicians should make a “firm commitment” to ensure that Stormont “collectively meets the needs of the people of Northern Ireland”.

TUV leader Jim Allister, who broke away from the DUP over Dr Paisley’s decision to share power with Sinn Fein, said he probably was one of the “most charismatic politicians that these islands produced in the 20th century”.

Nonetheless he said part of his legacy was “terrorists in government” and a political system at Stormont “not fit for purpose”. By any standard his journey from being “the scourge of republicanism to being the proclaimed friend of an unrepentant IRA commander” was a “remarkable” one, he added.

After the various tributes, politicians then went to the great hall of Parliament Buildings, Stormont to sign the book of condolences.

Men incur about two-thirds of penalty points when gender recorded – CSO 13:55
HSE ‘at war’ with then taoiseach and minister in 2019, says Reid 14:03
Storm Aiden prompts nationwide weather alerts for Halloween 13:13
Difficult to predict when Covid-19 cases will peak during winter, HSE chief says 12:43
ASTI meets to plan outcome of ballot for industrial action 12:28