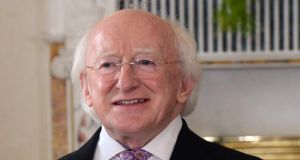 The legacy of Irish nationalist Thomas Davis lives on to inspire Irish people as they strive to achieve a nation founded on mutual respect, President Michael D Higgins said Friday.

President Higgins paid tribute to Davis who was born 200 years ago this year and noted that despite dying at the young age of just 30, he left a significant legacy over a three-year period through the founding of The Nation newspaper and his writings which still resonate today.

“Thomas Davis’s most famous work is, of course, ‘A Nation Once Again’, and I am sure most of you have been deeply moved by the stirring passion with which Davis wrote of the need for action on behalf of Irish freedom,” Mr Higgins said.

“Many of the values expressed in the writings of Davis are found in the Proclamation of 1916 and remain core to today’s Ireland. ”

Mr Higgins noted Davis was born a Protestant into an Ireland that was still suffering under the Penal Laws and reeling from the aftermath of the 1798 rebellion.

Mr Higgins said Davis’s had a firm belief in “a common humanity, which has such power as to transcend all divisions”.

“Davis had a spirit of empathy that enabled him to give voice to the concept of an Irish national identity – his was a vision for Ireland of a country united by heritage, language and a sense of shared community.”

While some may consider this vision of Davis to be overly idealistic or even naive, especially given the strength and depth of religious belief that existed among his countrymen and the strong attachment to land, no one could doubt the impact of his views and writings, he said.

“Today, as we stand in a free and independent Republic with liberty perhaps beyond even Thomas Davis’ dreams, much work remains to be done to realise his vision for a truly just and reconciled Ireland.”

“And I suppose that is the challenge for us all, to understand that the cumulative effect of small actions at local level can be transformational for a community and ultimately for a country,” Mr Higgins said.