President expresses shock and sadness over deaths at halting site 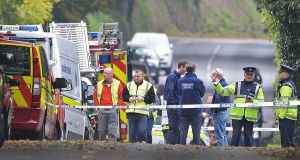 Emergency services at the scene of the fire at a halting site in Carrickmines, Co. Dublin. Photograph: Eric Luke/The Irish Times. 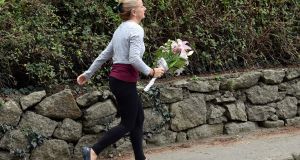 A woman bringing flowers to the scene of a fire at a halting site in Carrickmines, Co. Dublin. Photograph: Eric Luke / The Irish Times

President Michael D. Higgins has expressed his shock and sadness at the deaths of ten people including a six-month-old baby at a halting site in south Dublin in the early hours of Saturday morning.

“This is a most dreadful tragedy. My thoughts at this time are with the families and friends of those who have lost their lives and those who have been injured,” he said.

“I have asked to be kept informed on this shocking event throughout the day.”

Archbishop of Dublin Diarmuid Martin expressed his sympathy to the Traveller families who have been devastated by the tragic fire.

He said the news was heartbreaking for all in the Traveller and wider local community and asked that all those who died and those injured and their families be remembered in prayer at all masses in the Archdiocese this weekend.

He said Fr. Derek Farrell, parish priest of the Parish of the Travelling people in Dublin, was with the bereaved families.

Tánaiste Joan Burton said she was deeply saddened by the news.

“I would like to express my deepest sympathies with the families of those who tragically lost their lives. I wish those injured the very best with their recovery,” she said.

“I would like to acknowledge the emergency services for the efficient and professional manner in which they responded to the tragedy. My thoughts are with all those affected as they mourn the loss of their loved ones.”

Minister for Communications Alex White said it was an unspeakable tragedy.

“ I think everybody in the country’s hearts would just go out to the families, young children involved. It’s just so dreadfully sad... It’s very hard to find the words to describe how one feels, it’s just a terrible, terrible loss of life.”

Minister for the Environment Alan Kelly extended prayers and deepest sympathies on behalf of the Government to the families of the deceased.

Fianna Fáil leader Micheál Martin said he was extremely shocked by the news.

“This is an extremely shocking incident and I want to express my deepest sympathy to the families affected by this tragedy. I know our emergency services are working extremely hard in difficult circumstances since early this morning to deal with this incident and they are to be commended for their service,” he said.

“My thoughts are with all those affected by this tragic incident today.”

Sinn Féin leader Gerry Adams said it was horrific news to wake up to.

“This is horrific news to wake to on a Saturday morning with the loss of a number lives in a fire on a halting site in South Dublin.

“My thoughts are with the bereaved and with the fire fighters and first responders.”

The party’s councillor in the area Chris Curran said the news had come as a huge shock to the community.

“The blaze began around 4am this morning and as yet the cause is unknown,” he said.

“My thoughts are with the family and loved ones of those who have passed away and I want to wish those who have survived this awful tragedy a speedy recovery.”