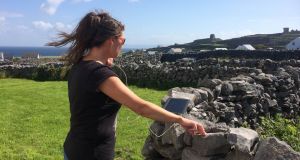 The prolonged electricity blackout affecting two of the Aran Islands has given renewed impetus to making the islands carbon-neutral, according to a local renewable-energy project.

Power was restored to 372 customers on the two Aran islands at about 9pm on Monday night, according to ESB Networks.

“The need is more obvious than ever after this experience,” said Mr Ó Maoildhia of the energy co-op.

All three islands lost power after a sub-sea cable at the mouth of Gregory’s Sound was ruptured on Friday last, but Inis Mór regained supply several hours later that same day.

Inis Oírr teacher Cormac Coyne was able to charge his mobile phones over the weekend using his own solar panels. However, he said that he and many neighbours have lost quantities of frozen food.

“We would rely heavily on freezers here, due to possible ferry disruption in bad weather,” Mr Coyne said. “Some people had top-ups from mobile generators, but the reality is that after 48 hours your food has to be thrown out.”

Inis Oírr’s doctor had to store certain medications in a fridge owned by a local business. However, communications were not completely severed as the clinics on both Inis Mór and Inis Oírr have a back-up radio system.

Broadband has been affected on all three islands over the past four days.

Use of solar energy has become far more frequent since the energy co-op initiated its programme, which also involves retrofitting houses to become more fuel-efficient.

ESB Networks has apologised for the outage, which it says was caused by a “fault” on the 9km-long sub-sea cable between Inis Mór and Inis Meaín. The cause of the fault, about 2km from shore in about 10m of water, has not yet been identified, it said, but it is “likely that the cable was struck underwater”.

“This cable has been in operation, without fault for almost 20 years,”it added.

ESB Networks said it could not compensate customers for the interruptions, and advised affected homeowners to contact insurers.