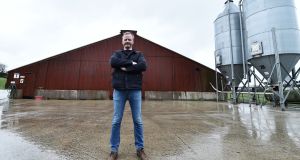 Farmer William Montgomery, in Co Antrim: “I was a person who never was a worrier much, but it has been very tough because sometimes you just can’t see an end to it.” Photograph: Colm Lenaghan/Pacemaker

Every one of the chickens on his farm in Broughshane, Co Antrim, arrives as a day-old chick. When the tiny birds are tipped out of their boxes, the temperature has to be just right. Very young chicks must be kept at 34-35 degrees, with the temperature gradually reducing as they get older; if it is too hot or too cold, the chicks will die.

For Montgomery a biomass boiler – which burns sustainably sourced wood pellets to provide a renewable source of heat – appeared to be a perfect solution. As well as being better for the environment, the indirect heat it produces is healthier for both farmer and chicks and rears better-quality chicken, leading in turn to increased profitability.

There was an additional incentive: the RHI scheme, which had been set up by the North’s Department of Enterprise in 2012 to encourage businesses to switch from fossil fuels to renewable heat sources.

But the RHI system was flawed. Unlike a capped scheme in Britain, there was no limit on usage and subsidies were over-generous. For every £1 of fuel burned in the green heating systems, users would receive £1.60 back.

The scandal over what became known as the “cash for ash” scheme brought down the North’s devolved government and raised serious questions over how Northern Ireland was governed and the conduct of some of its most powerful figures – not least the First Minister, Arlene Foster.

In 2018 Mrs Foster told the public inquiry into the scheme that the collapse of the scheme was a matter of “deep regret for me politically and personally”, but she did not believe she bore any personal responsibility for it.

Its report will be published in Belfast later on Friday.

“I did look at it and I thought of that saying you were told when you were younger, ‘if it seems too good to be true, it usually is’,” says Montgomery. “But the bank had looked at the figures and they had the written guarantee from the [then] Minister, Arlene Foster . . . to the banks saying it was copper-fastened.”

Montgomery is a supplier for the poultry processing giant Moy Park. It was from it that he first heard of the scheme, in 2013; the inquiry into RHI would later hear that Moy Park had been one of its prime beneficiaries.

In 2014 Montgomery borrowed £120,000 over five years to buy and install two boilers. He received approximately £21,000 per boiler per year under the RHI scheme; just over £26,000 went each year on paying back his loan, with the remainder used to pay for wood pellets for his boilers.

“I’d rather be using the boilers but they’re sitting there, and that nearly annoys you too, because it was something you were quite proud of,” he says.

He was unable to continue paying off his loan, and had to restructure. He now owes a total of £51,000 – which includes £23,000 to cover the cost of a new, gas-fuelled heating system.

“You’re at the age when you think you’re getting to a bit of financial security now but I’m going backwards again,” he says. “That’s one of the things that’s hard to deal with, that by the time I have this all paid off in 10 years’ time I’ll be 64.

“I was a person who never was a worrier much, but it has been very tough because sometimes you just can’t see an end to it. It just seems so unjust and unfair, how we have been treated.

“We have been made to be the scapegoats for the whole scheme.”

Other farmers have echoed this. A poultry producer from Co Derry who borrowed a total of £1.8 million to invest in his farm and who installed six biomass boilers described to The Irish Times how he was now struggling to provide for his family was suffering from anxiety and stress which had affected his work and his personal life.

“I have had neighbours and extended family members accuse me of stealing taxpayers’ money and taking money away from hospitals and schools due to the RHI scheme and the way the press and politicians have worded their statements against us,” he says.

The chairman of the Renewable Heating Association in Northern Ireland (RHANI), Andrew Trimble, says he is aware of three people who have taken their own lives within their 400-strong organisation as a result of RHI.

“When they all have loans that cannot be restructured, and the stress in the community, the pariah status, the jokes ... have been unbearable for some,” he says.

Over the course of the RHI inquiry, claims were heard of RHI boilers blazing 24/7 in empty sheds; Montgomery says this was never the case for farmers like him. “This thing that they were just burning all the time for no reason, I never did that. I used my heat to grow broilers the way I did [previously].

“The bit that’s sometimes lost by the general public is that I had a genuine need for heat ... a lot of people think you just heat broiler houses because you wanted them nice and cosy, just for the sake of it.”

He is concerned, too, about the environmental impact; he put in solar panels as well as biomass in an attempt to reduce his carbon footprint. “Now my three bird-houses are belching fossil fuel gases into the atmosphere,” he says. “Everybody will go back to gas, because it doesn’t pay you to run a biomass unit.”

Montgomery is a member of RHANI; the organisation is currently involved in legal challenges over the changes in the scheme, which it argues were unlawful; those who participated in the scheme would also like an apology.

“We would like some form of justice,” says Montgomery, “and you would hope there would be things that would come out of the inquiry that will help us in court with our case.”

He would like the tariff changed “back to something that is sustainable for users of biomass,” and believes the individuals responsible should be held to account.

“This has brought a government down, it’s created an awful situation in Northern Ireland, and the people who are directly responsible for that should definitely be made to resign.

“I suppose in that sense I’m talking more about the First Minister, because I do feel that the buck stops with the person at the very top of the situation.”

Leo Varadkar: We are not ready for one metre social distancing 12:02
Garda to operate scaled down Covid operation for June bank holiday 11:01
Have your say: Is ‘remote learning’ sustainable for your family? 10:42
This spring has been driest on record in Leinster 09:28
Girl (5) rescued after lilo drifted to sea in ‘good health’ 08:53