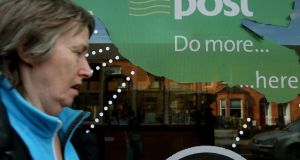 Postmasters are to vote on running their own candidates in the next general election. Photo: Brian Lawless/PA Wire

Postmasters are to back their own candidates in the next General Election after members voted in favour of the move on Sunday at their annual conference in Kilkenny.

Members of the Irish Postmasters’ Union voted to give their full support to a comprehensive political campaign to protect the Post Office Network and support local communities.

IPU General Secretary Ned O’Hara said a number of Postmasters and community activists in different parts of the country have already approached the Union to stand on the Post Office issue.

“They will run in their own right as Independent candidates and will now have the strength of Postmasters behind them. These candidates will be supported by 1,100 Post Offices across the country who will be urging customers and communities to vote for the Post Office candidate over the Government parties.”

“If the Government takes the necessary steps to protect the Post Office Network, it may not be necessary for the candidates to run. However, if there is not urgent progress, candidates and the constituencies they are running in, will be announced after the summer,” Mr O’Hara said.

The Irish Postmasters’ Union said its priority was to protect the post office network and support local communities which had been beset by closures and commercial competition from out-of-town shopping centres.

Its general secretary, Ned O’Hara, said there was a lot of frustration among members at what was seen as a lack of Government action to support post offices. Out-of-town shopping centres were taking the heart out of local communities.

In towns and villages, particularly in more rural areas, the closure of the local post office was preceded or followed by the closure of a Garda station, the local health centre, small shops, national schools and other services.