Plans to remove peace walls in Northern Ireland by 2023 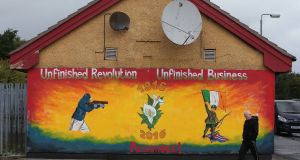 A man walks past a newly painted Republican mural commemorating the 1916 Easter Rising in the Creggan area of Derry. Photograph: Brian Lawless/PA Wire

Walls dividing Protestant and Catholic communities in Northern Ireland should be down within the next seven years, according to a Stormont junior minister.

Addressing a community festival in north Belfast, which has 16 so-called peace walls, Ms Fearon said: “By removing a peace wall we open a door to a new shared space and I believe we should be ambitious in our efforts . . . Reconciliation has been hampered by physical divisions so to help build a truly shared, united and reconciled community, we need to put in place the conditions and circumstances to remove these structures.”

Peace lines include a mixture of traditional walls, fences and gates and are the most visual reminder of the city’s troubled past.

They were intended as a temporary protection from violence during the 30-year conflict but remain almost two decades after the 1998 Belfast Agreement which ended the Troubles.

According to figures from the North’s Department of Justice, 50 barriers – 39 walls and 11 gates – are still in place.

Some structures stretch for kilometres and stand up to 18ft high.