Planned Cork motorway will not eliminate bottlenecks, hearing is told 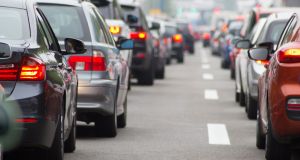 Plans to upgrade the N28 road between Cork and Ringaskiddy to a €220 million motorway will not lead to the elimination of traffic congestion, a planning hearing has been told

Independent member of Cork County Council, Cllr Marcia D’Alton told the An Bord Pleanála hearing into the planned M28 that roads included in the Trans European Transportation Network (TEN-T) network must be motorways which, as a priority, establish the key links and interconnections to eliminate bottlenecks.

“This is the first failing of the proposed M28. Freight traffic from Ringaskiddy would run over Shanbally, over Shannonpark and hurtle down the Mulcon Valley into the Bloomfield Junction to join the N40 South Ring Road,” said Cllr D’Alton.

“If it hasn’t come to a slow at the Bloomfield Interchange, it’s very likely to come to a stop on the N40, which although it is regarded as a strategic national route, has become an essential part of everyday life for masses of Cork’s commuting citizens.”

Cllr D’Alton noted that over the past 20 years, traffic volumes on the N40 have risen hugely to the point that it now exhibits severe congestion during morning and evening peaks with tailbacks which can, on bad days, extend from the Jack Lynch Tunnel back to the Kinsale Road Roundabout.

While upgrading the N28 to a motorway would undoubtedly accommodate projected traffic growth from Ringaskiddy down the Bloomfield Interchange, the fact that the interchange is set to remain a single lane loop connecting to the N40 would mean the road would end in congestion.

“Upgrading the Bloomfield Interchange does not comprise part of the current project and in any event to upgrade it would be highly sensitive given the ecological value of the Douglas Estuary Special Protect Area at Bloomfield,” she said.

Cllr D’Alton said that contrary to much of the commentary, the upgrading of the N28 to motorway status was not essential for the Port of Cork to relocate its operations at the City Docks and Tivoli and this had been acknowledged by the Port of Cork itself.

She pointed out that the Port of Cork said as much in an Environmental Impact Statement which it presented to a planning hearing on its proposed move from to Ringaskiddy when it stated that the port development was “not dependent on the N28 upgrades for the early years of its operation.”

And she pointed out that planning permission had been granted for the Port of Cork redevelopment of its facility at Ringaskiddy on the basis it would develop a mobility management plan which would restrict freight movements from the Port onto the N28 during peak periods.

“I believe that the route that is currently planned for the proposed M28 is far from optimal and that if this project is pursued to construction, it will have tremendously negative impacts on the lives of thousands of residents living along that route,” she said.

“If there is to be delivery on the long held aim to build a high quality road out of Ringaskiddy, then I believe we need to seek an alternative route which has the potential to offer more than a simple connection between Ringaskiddy and the N40 South Ring Road,” she added.

Earlier, former Mayor of Cork County, Cllr Seamus McGrath of Fianna Fáil urged An Bord Pleanála not to rush into any decision on the M28, pointing out that even if planning permission is granted for the proposed route, work cannot commence until an upgrade is carried out on the N8 at Dunkettle.

“I fully accept there needs to be an upgrade to the road network linking Ringaskiddy and Carrigaline to the N40 but having said that there is time to go back to the drawing board because the next key project in Cork is the Dunkettle Interchange but that’s going to take a number of years to complete.

“So if planning permission is given for this proposed route for the M28, it’s going to be sitting on the shelf for a number of years until Dunkettle is completed and that gives us time to reassess the design and come up with something that has less of an impact on communities and residents.”