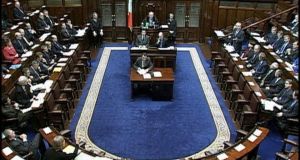 The Dáil chamber. The Peaple’s Candidates criticised the party whip system for failing to allow politicians represent their constituents.

Irish political parties are private clubs which are in breach of the constitution because they act to serve their own interests rather than the constituency that elects them, according to a new political grouping which is running 18 candidates in the local elections.

The People’s Candidates grouping launched its manifesto in Cork today and stressed it is not a political party but rather a collection of individuals bound together by a simple commitment to democracy expressed in what they described as the People’s Contract.

Spokesman, Diarmaid Ó Cadhla, one of the seven candidates running under the People’s Candidates banner for Cork City Council, explained that the grouping have pledged to act in accordance with the wishes of the people on each issue.

“With parties, candidates usually sign an undertaking to follow their party ‘whip’ - we believe the operation of the party whip system is unconstitutional because it asks representatives to represent their party rather than the constituency that elects them as the constitution requires.”

The People’s Candidates have “no pre-decided policy” and have committed “to ongoing consultation with the community” on each issue and will operate a system of “recall” where the community can unelect people if they don’t represent them accurately, he said.

Asked what the group’s position was on water charges, Mr Ó Cadhla said the group’s only programme was that it should be the people who set the policy agenda and people had not agreed to the privatization of water resources. “We are against the imposition of policy.”

Claire Cullinane, one of six People’s Candidates running for Cork County Council said that the grouping was neither left-wing nor right-wing but neutral and people were willing to engage with them on the doorstep once they identify themselves as non-party.

Another candidate, Shirley Griffin instanced the group’s philosophy on the issue of abortion when she said that her personal view was not important but any change in legislation should be put in a referendum to the people and if a majority say no, it should not be brought in.