Pay deal approved so hospital chief would not lose top-up 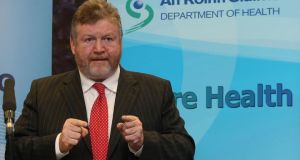 Ministers approved a special annual pay deal of €195,000 two years ago to facilitate the transfer of a senior executive in the voluntary hospital sector into the mainstream HSE so he would not lose out on additional or top-up income he was earning.

Minister for Health James Reilly said on Tuesday that he had ordered the recent HSE internal audit report that uncovered the widespread top-up payments for executives across the health service after a report by the Health Information and Quality Authority made reference to this practice in a report on Tallaght hospital in May 2012.

However, several months earlier, in late 2011, the Department of Health sought and secured approval from the Department of Public Expenditure and Reform to pay a salary of up to €195,000 to Bill Maher, the then acting chief executive of St Vincent’s University Hospital in Dublin, to take over the running of the group of HSE-operated public hospitals in the west of Ireland.

Exceptional matter
At the time, the official pay rate for the chief executive post at St Vincent’s University Hospital was €145,959.

The Department of Health said yesterday that the arrangements were approved “as an exceptional matter and did not represent a change in overall public service pay policy”. “In late 2011 the HSE identified an urgent need to put in place appropriate management arrangements for the Galway and Roscommon hospitals, in view of the need to address critical service difficulties that had been identified in the hospitals concerned. Bill Maher was identified as the most appropriate person to take on the role of chief executive of this hospital group, on a secondment basis for three years from his position at St Vincent’s Hospital.”

Remunerated
“Following a request by the Department of Health, DPER [Department of Public Expenditure and Reform] approved this secondment on a personal-to-holder basis. The remuneration package reflected the level at which Mr Maher was being remunerated by the St Vincent’s Hospital Group in respect of his duties in the public hospital and additional work undertaken separately for St Vincent’s Private Hospital. ”

A spokeswoman for Minister for Public Expenditure and Reform Brendan Howlin said: “I can confirm that the rate of pay was sanctioned, based on the information provided by the Department of Health, on a personal-to-holder basis, and based on the circumstances of the particular appointment.”

Both Taoiseach Enda Kenny and Dr Reilly said on Tuesday that the payment of top-up income to health service executives would have to stop.

1 Covid-19: Further easing of restrictions likely but little change to roadmap
2 Barack Obama urges those protesting in US to seize the momentum
3 Covid-19: Varadkar downplays expectation of accelerated lifting of restrictions
4 Nursing homes dispute accuracy of HSE data on Covid-19 deaths
5 With Lincoln looking on, the crowd dropped to their knees as 7pm approached
Real news has value SUBSCRIBE