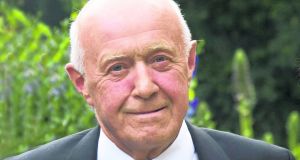 Paul Smithwick’s award was marked by an event held in the Smithwick brewery visitor centre, Kilkenny, which was attended by the British ambassador

Paul Smithwick, a member of the famous Kilkenny brewing family, has been awarded an Order of the British Empire (OBE) in the New Year’s honours list.

Mr Smithwick receives the award for his service to British-Irish relations. He, along with the Duke of Abercorn, set up Bonds of Friendship which brings together members of An Garda Síochána, the PSNI, the Irish Army and the British army regiment the Irish Guards on an annual basis.

He was also involved in the Mayo Peace Park, which opened in 2008. It remembers all those from the county who died in armed conflict, most notably those who died in the first World War.

The award was marked by a black tie dinner in the Smithwick brewery visitor centre in Kilkenny attended by the British ambassador to Ireland, Robin Barnett.

The event was hosted by Mr Smithwick’s brother Peter, the former president of the District Court.

It was the first time a dinner was held at the brewery since Daniel O’Connell was hosted there in 1840.

Mr Smithwick is the ninth generation of the family since his ancestor John Smithwick founded the brewery in 1710. He is a former lawyer who is now the chairman of the Sullivan Brewing Company and a director of a number of companies in Northern Ireland.

Also honoured in the New Year’s list is Northern Ireland manager Michael O’Neill who guided his team to the knockout stages of Euro 2016. He receives an OBE as does Wales football manager Chris Coleman for his achievement in getting Wales to the semi-final of the competition.