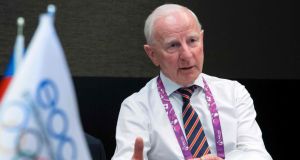 A number of Olympic Council of Ireland (OCI) committee members staged a walkout in late August prior to a committee meeting in Dublin because Pat Hickey was “live” from Rio de Janeiro on the phone of one of the members.

Last month, Mr Hickey said he would temporarily step aside as president of the OCI after a warrant for his arrest was issued by Brazilian police.

He faces charges in Rio of facilitating ticket-touting, formation of a cartel and ambush or illicit marketing.

The call from Mr Hickey came minutes before the meeting was about to begin. It is believed the call was to “touch base” with his committee members.

When several of the members realised it was Mr Hickey on the phone they immediately left the room.

When the call ended they came back and resumed the meeting.

He was not “patched in” by phone as the meeting took place. It is not known whether Mr Hickey wished to participate in the meeting or if he wanted to listen to what was being discussed.

It is also understood those members who left the room did so because they believed direct contact with a president who has stepped away from his position could have led to legal complications.

OCI vice-president Willie O’Brien has assumed the presidential duties of Mr Hickey on an interim basis.

It is not known if all of the members were in attendance at the meeting.

The OCI appointed auditors Grant Thornton to conduct an independent review of its handling of ticketing arrangements for the Rio Olympics.

Submissions are being taken from athletes and their families on their experience of ticketing allocation and availability for the Olympics.

The OCI said the review was intended to be finished by October 10th, at which point it would be given to Judge Carroll Moran to consider as part of his State inquiry into the controversy.

Mr Hickey is currently staying in a one-bedroom apartment in Rio, paid for by the OCI. “In order to qualify for bail conditions Mr Hickey had to have an address in Rio,” the OCI’s public relations company said.