‘We are not in it for world peace’, says Irish bookmaker 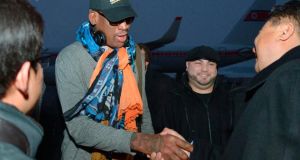 The Irish bookmaker Paddy Power is set to unveil a star-studded NBA basketball team set to take on a North Korean side in a controversial match dubbed the “Big Bang in Pyongyang” next month.

A spokesman defended the move, saying it hoped to sidestep politics, despite the game being staged in one of the world’s most secretive states and with a dire human rights record.

Former US basketball star Dennis Rodman arrived in North Korea yesterday with a Paddy Power representative and film crew to coach the North Korean side ahead of the January 8th fixture.

The recent removal from power and execution of North Korean leader Kim Jong-un’s uncle Jang Song-thaek, and fears over resulting instability in the country, have not affected plans. It is understood assurances have been received about the safety of those travelling.

Paddy Power is understood to be investing a six-figure sum in the event, which will include the payroll for a star-studded US basketball team made up of primarily current NBA players.

Dubbed “basketball diplomacy” by Rodman, formerly of the Chicago Bulls, Paddy Power says it took advice on the implications of the trip.

“The reality is that we are not involving ourselves in the politics. It’s a basketball match; we have gone into this with our eyes open,” said a Paddy Power spokesman.

“We are not in it for world peace; we are in it to put on a ‘how the hell did they do that’ type of event.”

The event may be viewed with slightly more concern by critics of the pariah state. Since the 1990s it is estimated that about two million people have died of starvation in North Korea.