Some 60 people employed at waste facility 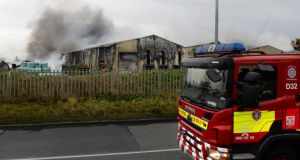 The fire at the Oxigen recycling plant at the Merrywell Industrial Estate in Ballymount, Dublin. Photograph: Dara Mac Dónaill

Waste management company Oxigen has said it hopes to redeploy as many staff as possible following the fire at its plant in south Dublin.

The storage warehouse at the company’s Ballymount recycling plant on the Merrywell Industrial Estate in Dublin 22 was completely destroyed by fire at the weekend.

Some 120 staff are currently employed at Ballymount, including in the company’s offices there.

Martin Harrell, spokesman for Oxigen, said though the office block was in the path of the smoke, it was not affected by the fire and will be able to operate as normal. The company’s waste collection service will also operate as normal as almost all its vehicles were removed from the site before the fire could spread to them.

“We can’t say how many jobs will be lost if any,” Mr Harrell said. “All staff are still currently employed on pay and we are looking at as much redeployment as possible. There will also be a massive clean-up job to do on-site.”

The company has another recycling facility in the same area, with 25 sites in total in 10 counties around the country.

“We will do everything in our power to save as many jobs as possible,” Mr Harrell said.

The company intends to reopen the facility, but Mr Harrell said he will also be contacting other waste recycling companies in Ballymount to see if they have any openings for staff. Ballymount is one of the biggest waste hubs in the country with companies including Panda and Greyhound operating centres there.