Ownership of Dún Laoghaire Harbour to be transferred on Wednesday 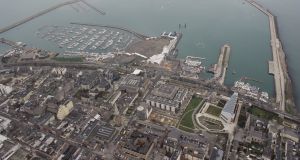 Dún Laoghaire-Rathdown County Council is to assume control of Dún Laoghaire Harbour next week, amid growing concern over how it will finance a potential repair bill of €33.1 million and annual maintenance costs of €800,000.

Council chief executive Philomena Poole has told councillors the Department of Transport had determined the council would have “full responsibility for the management and operation of the harbour” from Wednesday, October 3rd.

She said the current operator, the Dún Laoghaire Harbour Company, would “no longer exist” and staff and undertakings would immediately transfer to the council.

Concerns have been raised about the impact on ratepayers and homeowners if they are forced to financially underpin the harbour. These concerns followed a consultants’ report which found issues with the structure of the harbour and doubt about ongoing revenue.

The company had been seeking additional sources of revenue to maintain the harbour, particularly since the Stena Line Ferry service announced in 2015 it would not resume its, by then seasonal, service.

Among the proposals put forward were a floating swimming pool alongside the East Pier. The county council committed some €1.5 million in support of this scheme. The company had also proposed building floating houses in the harbour, while the sale of land at the West Pier was also mentioned.

The Harbour Company was successful in securing a tenant on a long-term lease to develop a business incubation centre at the former ferry terminal at St Michael’s Wharf.

In an email to councillors, Ms Poole said she had received confirmation from the Department of Transport of the transfer. The consent of the Ministers for Housing and Local Government and Finance are also required but it is understood these have already been secured.

The Department of Transport has said the harbour company “has substantial net assets as well as a healthy bank balance”.

In a short statement, it said the department said the assets and cash balance “will transfer to the council and allow for any necessary infrastructural works to be carried out without impacting on local projects or local property tax”.

The statement concluded the harbour will get a “welcome boost” in terms of rental income from the former terminal building.

Details of the amount of the bank balance were not provided but it is understood the department disputes the need for the €31.5million to be invested at least in the short term.

Fianna Fáil’s Cormac Devlin said that while everyone wanted the harbour, “the costs of this will affect local property tax and rates”. He called on Minister for Transport Shane Ross to provide adequate funding.

People before Profit’s Richard Boyd Barrett said the move was a “huge victory for people power, local democracy and many years of campaigning by the Save Our Seafront group”. He added he would be seeking guarantees the Government would “contribute financially to the protection and development of the harbour in recognition of its national importance as a totally unique part of the country’s marine and architectural heritage and cultural history”.