Over one-third of Belfast Bikes are stolen or vandalised 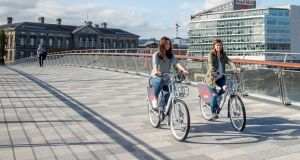 Some 210 of the 576 bikes in the Belfast Bikes fleet have either been stolen or taken out of service due to vandalism.

More than one-third of the bicycles used in the popular Belfast Bikes scheme is currently out of action due to theft or vandalism.

Some 210 of the 576 bikes in the fleet (36 per cent) have either been stolen or have had to be taken out of service due to vandalism, it has emerged.

Belfast City Council claims this costs about £21,000 (€25,000) per year and said that over the Easter weekend, 19 bikes were stolen, six of which were recovered, and a further eight vandalised.

Over the past two years, some bikes have been stolen for personal use, but the council says the main problem is “simply mindless vandalism”, including 10 bikes being dumped in the river Lagan and one bike being sawn in half.

The Coca-Cola Zero public hire scheme, supported by the council and Stormont’s infrastructure department, is operated by NSL Next Bike.

DUP Lord Mayor Brian Kingston says “brute force, angle grinders and iron bars” have been used to remove the bikes from some of the 40 dock stations across the city.

It is also thought young people are placing stones in the lock mechanism so when users return their hire bikes they are not secured properly and are therefore easy to steal.

Options being considered to combat the theft and vandalism problems are thought to include new locking mechanisms, installing CCTV, tracking devices on the bikes and moving the dock stations to other sites.

The Belfast experience is in sharp contrast to Dublin, where the scheme, which does not use identical technology to Belfast, does not suffer from the same levels of theft and vandalism.

In the first four years of the Dublin Bikes scheme, only 12 bikes were stolen or damaged.

On Thursday, a statement from Dublin City Council said it does not collect any statistics on vandalism or theft “because they are not a feature of the scheme in Dublin”.

“The lack of issue is due in part to the activities/visibility of the operator [JCDecaux] in cleaning and maintaining the bicycle fleet and stations to a high standard, the careful placement of stations in high-visibility locations and the use of a high-quality station bike locking mechanism, designed by the operator.

However the heavy use of the bikes by members is seen as the main reason vandalism/theft has not become an issue.”

Alliance Party councillor and keen cyclist Emmet McDonough-Brown says people in Belfast “have really bought into the scheme” making the current problems all the more disappointing.

“It has been tremendously successful in terms of its adoption with the people of Belfast taking it to their bosoms and we need to see respect for the investment the public purse has made,” he said.

“If we want to see the scheme expanded into other communities and other areas then we will need to address the issues of theft and vandalism because we couldn’t commit public monies without being confident we were getting a return on that investment.”