Over 100 taxi drivers prosecuted for having no driving licences 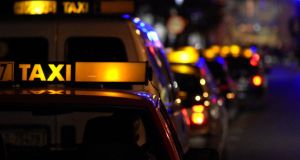 More than 100 taxi drivers have been prosecuted for operating a vehicle without a driving licence within the past five years, making it the most common prosecution the National Transport Authority has taken.

The authority, which is the regulatory body for small public service vehicles and handles taxi complaints, took 80 prosecutions against drivers last year.

The body also referred 208 complaints to an Garda Síochána, the bulk of which were connected to road traffic matters which come under that organisation’s remit and complaints against taxi drivers who were not operating the taxi as a public service vehicle at the time.

The authority prosecuted three drivers who had allowed another person to operate a taxi without a valid driver licence last year.

Other prosecutions related to non-payments of fines: five for taxis standing for hire in areas that were not appointed taxi stands and two for failing to operate or fit a taximeter.

The authority received 952 complaints last year, a 28 per cent increase on the previous year. Almost half of complaints in 2014 related to driver behaviour while more than one-third related to fares.

A further 12 per cent related to hiring and booking while 5 per cent concerned the condition of taxis. 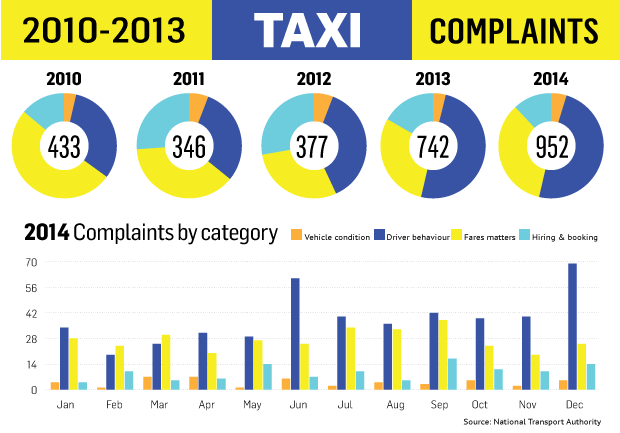 As well as referring more than 200 complaints to the Garda, five complaints involving taxi drivers smoking in vehicles were referred to the Office of Tobacco Control last year.

A further three complaints were referred to other bodies including the Revenue Commissioners.

In two cases complaints referred to the authority were forwarded to the Department of Transport as they related to issues about public service vehicles which fell outside its remit.

Examples of complaints received by the National Transport Authority in 2014:

Complaint: A taxi driver overtook a van on the left-hand-side of the vehicle, occupying a bike lane and “almost crushing” a cyclist.

Outcome: The complaint was reported to an Garda Síochána as the authority responsible for road traffic matters. The National Transport Authority provided appropriate assistance to gardaí.

Complaint: A taxi driver told a store manager who attempted to hail a taxi outside their workplace that he was not willing to go to particular destination and told the customer to get out and hail another taxi.

Outcome: A fixed payment notice was issued for “unreasonable refusal to carry passenger where the journey is not more than 30 kilometres”.

Complaint: None of the dash board lights were working in the taxi, it was dark and it was very difficult if not impossible to read the speedometer.

Outcome: No further action was taken following a vehicle inspection.

Complaint: A driver at a taxi rank refused to take a potential passenger’s fare, insisting the customer take a taxi further up the queue instead.

Complaint: The taximeter was already running when the taxi arrived and, at the journey’s end, the driver charged the customer €8.50 instead of the €6.70 stated on the meter. The customer was not given a receipt.

Outcome: A fixed payment notice was issued for failure to provide a receipt.

Complaint: A taxi driver did not turn on the taximeter and charged tourists €40 for a trip from the airport which they later discovered should have cost no more than €31.

Outcome: The taxi driver said the fare included a return journey to the airport. A refund of €20 was accepted by the customer and the taxi driver was advised on the use of the taximeter.