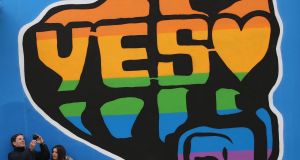 Concerns have been raised regarding finances in the Glen charity, which was involved in the marriage equality referendum campaign. Photograph: Niall Carson/PA Wire

A full audit of the finances of the Gay and Lesbian Equality Network (Glen) is needed in order to establish whether any funds were misappropriated, according to its outgoing executive director.

Áine Duggan said that while she would like to be able to say “100 per cent” that no misappropriation had occurred at the organisation, she was not in a position to do so until an audit was completed.

Ms Duggan told RTÉ’s Morning Ireland that she became aware of grave issues and irregularities at the charity shortly after being appointed last October. She brought these to the attention of the board and recommended “corrective action”.

A big concern was that a number of financial transactions, totalling more than €60,000, were not being reported in the management accounts seen by the board, she said.

The board was also unaware of spending that had taken place on a political campaign and on Glen credit cards, she said. “People got into the habit of doing things and that needed to be corrected.”

Glen monies, in the form of the office and staff time, were used for a political campaign, though this was later reimbursed.

According to Ms Duggan, the use of financial transactions “off the books goes back a decade”. Charities had a responsibility to ensure money raised for one purpose was not used for another.

She said there was “complete agreement” on these issues of concern when they were raised within the organisation. When she brought these matters to the attention of the Charities Regulator, its initial concern was about financial mismanagement in the organisation.

Asked why she is stepping down, Ms Duggan said the issues were of grave concern and Glen would be best served by the appointment of a consultant to steer the organisation through the current phase until it is “CEO-ready”.

It emerged on Sunday that official investigations had begun into whether the charity breached governance rules and, separately, into allegations of bullying made by staff.

The Charities Regulator has told Glen to provide it with financial records, details of credit cards and the report of an independent auditor by the end of this month.

“This arises from a request to the regulator for guidance following an internal review. The request was made on the instructions of the board, which is fully cooperating with the regulator,” Glen said in a statement. “The process is ongoing and we will work with the regulator to implement any recommended changes in our procedures.”

One of the issues being examined by the regulator concerns the use of the charity’s resources to support political campaigning, The Irish Times understands.

Glen’s co-chairman, Kieran Rose, has stepped down from this role after it emerged that campaign literature for his Seanad election campaign last year was printed at the charity. While the cost of the printing had been reimbursed, the organisation sought clarification from the regulator in case it has breached rules limiting the involvement of charities in political campaigning.