One-way system proposed for Inchicore to save trees 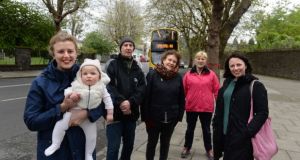 Inchicore residents (from left) Lauren Tuite, baby Margot, Gerard Greene, Annie Dibble, Christine Kavanagh and Elizabeth Burns on Grattan Crescent. They are among a number of local objectors to the felling of trees on the road. Photograph: Dara Mac Donaill

The National Transport Authority (NTA) is proposing to limit cars in part of Inchicore following a request from locals for a one-way system in the south Dublin suburb to save trees.

More than 70 residents from Inchicore wrote to the authority earlier this year in relation to the BusConnects proposals, stating that saving trees at Grattan Crescent was their “number one priority” and proposed a one-way system for private motorists on the road “as a compromise”.

Under the NTA’s proposed Liffey Valley to city centre corridor, some of the trees on Grattan Crescent would have to be removed to accommodate an additional bus lane.

A number of residents and local Green party councillor Michael Pidgeon met the NTA on Tuesday night to see the latest draft plans for the area under the BusConnects project.

Lauren Tuite, a resident who attended the meeting, said the plans presented included a one-way system for private vehicles on Grattan Crescent.

“There’s a one-way system from Kilmainham Gaol right to Inchicore currently, so it would just continue that one-way system, which is what we had proposed,” she said.

Ms Tuite said the majority of residents present were “excited” by the plans, with a small number advocating to keep a two-way system for private vehicles. She said the plans also set out for more seating outside Inchicore National School, the planting of trees and additional footpath space.

The NTA said draft plans are being developed based on initial concept designs and submissions received under public consultation, which closed at the end of May.

“We agreed to keep a dialogue open with local resident groups across many of the corridors during the design process as we are listening. So at present there is a draft one-way system in that area and a second round of public consultation will commence in the autumn and the detailed designs will be available then for further submissions,” an NTA spokeswoman said.

“We are meeting more groups in the coming weeks and as already stated where there are feasible, realistic and workable solutions to minimise the impact on trees including one-way systems and removal of on-street parking these are all being considered once we achieve dedicated bus lanes and cycle lanes.”

“Residents had worked out an alternative and were willing to make a compromise and saw the benefits of those improvements in the long-run.

“I think the fact that they didn’t go in necessarily just opposed, they went in with suggestions and alternatives which was really welcomed.”

More than 1,400 properties stand to lose part of their front gardens to accommodate the plans, while more than 1,600 trees and 700 parking spaces would be lost.

A revised redesign and updated corridor plans are due to be published in the autumn and further rounds of public consultation are planned.