Omagh bombing: Key events before and after the attack

On August 15th, 1998, a dissident republican car bomb ripped through the Co Tyrone market town of Omagh. The attack claimed the lives of 29 people and injured more than 200 others. Footage: Reuters 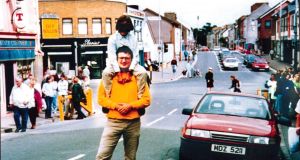 Spanish tourist Gonzalo Cavedo standing in front of the vehicle which contained the bomb that exploded in Omagh that day. Police found the image in a camera among 30 tons of rubble removed from the scene. 23-year-old Gonzalo Cavedo was visiting the town as part of a Spanish group, and survived. Photograph: RUC/PA

The attack, which came four months after the signing of the Belfast Agreement, was the single deadliest atrocity in the history of the Troubles.

This is a timeline of the main events leading up to and beyond the Real IRA bomb explosion, which claimed the lives of 29 people, including a woman pregnant with twins.

A red Vauxhall Cavalier — reg 91 DL 2554 — is stolen in Carrickmacross, Co Monaghan, in the Irish Republic.

14.32: Samaritans office in Coleraine is called with another warning. “Am I through to Omagh? This is a bomb warning. It’s going to go off in 30 minutes.” The caller said the bomb was 200 yards from courthouse. He also gave codeword Martha Pope.

14.35: UTV receives another phone warning: “Bomb, Omagh town, 15 minutes.” Two of these warnings were phoned from a call box in Forkhill, south Armagh. The third was made from a phone box in Newtownhamilton, also in south Armagh.

There was no street named Main Street in Omagh. The only target specified was the courthouse, which was at the top of High Street at the west end of the town. The car had actually been parked at the east end of the town, on Market Street, more than 500 yards from the court.

Police cordon off High Street and move shoppers and shop owners down to Market Street before commencing a search round the courthouse.

As a result all the people who had been in Omagh town centre when the warning came through had now assembled in Market Street, yards from the red Cavalier.

Among those gathered was a group of Spanish students who were spending the summer in Buncrana. They had gone to Omagh for the day along with a number of local children from the Co Donegal town.

15.10: A 500lb bomb packed in the Cavalier is detonated with a remote trigger. The explosion tears through Market Street. Shop fronts on both sides are blown back on top of customers still inside.

Glass, masonry and metal tears through the crowd on the street as a fireball sweeps out from the epicentre. Twenty-one people are killed instantly — some of their bodies were never found, such was the force of the blast. A water main under the road ruptures. Gallons of water gushes out. Some of the dead and badly injured are washed down the hill.

15.10: Emergency operation begins. The two ambulance crews on call at the nearby Tyrone County Hospital arrive at the scene within minutes. Survivors are already tending to the injured and covering the dead.

Civilians who had been on nearby streets also rush to the scene to help. People grab medical supplies from a chemist’s shop while linen from a drapers is used to cover the victims.

Buses are commandeered from the nearby Ulster bus station to help take the injured to hospital. Shelves and doors are used as makeshift stretchers.

As news of the attack filters through, off-duty medical personnel head for the hospital. As well as those who died, more than 300 people were injured in the blast.

Army helicopters are scrambled to help the ambulance service ferry patients from the swamped Tyrone hospital to other medical centres.

Omagh’s leisure centre is transformed into an incident centre, with hundreds of relatives gathering there waiting for news on loved ones.

Inundated with calls, the Tyrone County Hospital phone system crashes. Staff ask members of the public for mobile phones to contact other hospitals. A temporary morgue is set up in a British Army base in the town.

Relatives of those people still unaccounted for wait at the leisure centre overnight.

12.00: The identity of the 28th victim who died on the day is revealed. (61-year-old year Sean McGrath would die a month later from injuries sustained in the bomb.)

12.45: RUC chief constable Ronnie Flanagan addresses the world’s press at the scene. “This is an attack, not carried out against the police or the army, but against the people of Omagh. We have had men, women and children slaughtered, slaughtered by murderers who want to murder, slaughtered by murderers who have nothing else to offer but murder, people who gave us a totally inaccurate warning, people who phoned to say there was a bomb close to the courthouse and as our officers searched and moved people from the area of the courthouse, a bomb detonated some 400 yards away.”

The Real IRA admits responsibility for the attack. The group claims its target was commercial and not civilian and blames loss of life on failure of RUC to respond to “clear” warnings. Northern Ireland Secretary Mo Mowlam describes the statement as “a pathetic excuse for mass murder”.

One week after the attack a day of reflection is held. An estimated 60,000 people gather in Omagh with thousands more attending vigils in other towns and cities across Ireland.

In Omagh, a service is conducted by church leaders on the steps of the courthouse. The event is best remembered for a moving performance by local singer Juliet Turner, whose ballad Broken Things was beamed across the world.

The RUC and Garda Síochána arrest 12 men in connection with the bombing. They subsequently released all of them without charge.

Seven men are arrested in a joint RUC-Garda operation.

Colm Murphy is charged with conspiracy to cause an explosion likely to endanger life or cause injury. The 48-year-old from Ravensdale, Co Louth, was also charged with membership of an unlawful organisation — the so-called Real IRA.

At the inquest into the deaths of 29 people in the Omagh bomb, Coroner John Leckey says he will press the courts to prosecute the bombers with the destruction of unborn twins. Avril Monaghan had been pregnant with twins when she was killed. Mr Leckey said he was in no doubt that 31 people were killed in the bomb and that he would write to the Director of Public Prosecutions to ask him to consider charging anyone apprehended for the bombing with child destruction.

A report by the Police Ombudsman finds that the RUC Special Branch failed to act on prior warnings and slammed the RUC’s investigation of the bombing.

Colm Murphy is found guilty by the Dublin special criminal court of conspiracy to cause the Omagh bombing. He is the only person yet convicted in connection with the explosion. He is jailed for 14 years.

Sean Hoey, of Molly Road, Jonesborough, Co Armagh, was formally charged in court with the murder of the 29 people killed in the Omagh bomb. He was the first person to face a murder charge in relation to the attack.

Hoey is found not guilty of 58 charges, including the murders of 29 people in the Omagh bombing. Clearing Mr Hoey, the judge criticises police witnesses for “deliberate and calculated deception” during the 10-month trial.

The families of some of the victims of the bomb begin a landmark civil case, suing five men they claim were involved.

A memorial garden is opened in Omagh to remember the victims of the blast, as well as a monument on the site where the bomb exploded.

The judge in the civil trial rules that Michael McKevitt, Liam Campbell, Colm Murphy and Seamus Daly were all liable for the Omagh bomb. He orders them to pay a total of £1.6m damages to 12 relatives who took the case. A fifth man, Seamus McKenna, is cleared of liability for the bombing.

Michael McKevitt and Liam Campbell lose their appeal against the civil trial verdict. Colm Murphy and Seamus Daly both win their appeals.

Mr Murphy and Mr Daly are both found liable for the Omagh bombing after a civil retrial.

Mr Daly is charged with the murders of 29 people in the Omagh bombing.

The prosecution case against Mr Daly collapses. The Public Prosecution Service decides there is no reasonable prospect of conviction after a key witness contradicted his own previous testimony. Mr Daly has always denied any involvement in the bombing.

A bid by Liam Campbell and Michael McKevitt to overturn a landmark civil ruling that found them liable for the Omagh bomb was rejected by the European Court of Human Rights.

Relatives of Omagh bomb victims sue PSNI Chief Constable George Hamilton for investigative failings they believe let the killers escape justice. The bereaved families issued a writ against the chief constable seeking damages and a declaration their human rights have been breached

A legal challenge to the government’s refusal to hold a public inquiry into the Omagh bombing is pushed back to 2019. Michael Gallagher, whose son Aiden died in the attack, is taking legal action against former Northern Ireland secretary of state Theresa Villiers. The case was due to be heard at the High Court in Belfast. Proceedings were adjourned to February 2019 after issues of national security were raised in a closed session. – PA