Olympic tickets inquiry will not have power to compel witnesses 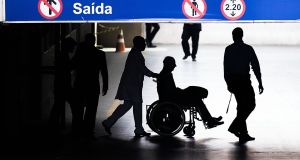 Pat Hickey has been transferred to a Rio remand prison, authorities have confirmed.

The state’s penitentiary service says Mr Hickey, who has stepped aside as Olympic Council of Ireland (OCI) president temporarily, is being held in the José Frederico Marques Public jail, at Gericinó Penitentiary Complex, colloquially known as Bangu 10.

He was transferred after giving a deposition to police and registered into custody yesterday following release from the hospital he was taken to after feeling unwell during his arrest on Wednesday.

On Friday the Olympic Council of Ireland said it will “co-operate fully with any inquiry into its handling of ticketing arrangements for the Rio Olympics”.

Its statement came ahead of an announcement by Minister for Sport Shane Ross on Friday that he would appoint a retired judge to leada non- statutory inquiry into the controversy.

Mr Ross said the Attorney General had advised taking this path, and he and Minister of State Patrick O’Donovan had agreed.

A non- statutory probe would mean there is no power to compel witness to attend.

Mr Ross said an initial report should be issued within 12 weeks. He said a decision would be taken at that point as to whether it can be published or redacted.

The Minister stressed they would not do anything to prejudice the criminal investments in Brazil.

In its earlier statement, the OCI said it “will now also commission its own independent inquiry into the ticketing arrangements for Rio 2016. The previously announced internal inquiry by the OCI has been discontinued”.

In a separate statement, sports company THG said it “wishes to make clear that it would very much welcome such an inquiry and pledges to provide full cooperation in the strong belief that it can demonstrate that the company has acted lawfully at all times”.

“THG would like to see that an independent inquiry, under the chair of a respected Irish legal figure, be actioned expeditiously.” THG has wholly refuted any suggestion of impropriety on its part.

In a statement Pro10, the Olympic Council of Ireland’s (OCI) authorised ticket seller, said it believed there should be a full “ Commission of Investigation under the 2004 Act of that name.”

It said such an inquiry “should be established speedily; investigate all relevant facts and report its conclusions in the shortest possible time.”

Pro10 said it had “nothing to hide” and was “therefore anxious that the full facts are established and made public as soon as possible so that our good name can be exonerated.”

It said it would “comply fully with the proposed commission”.

Authorities in Brazil say the OCI nominated THG last year to act as its authorised ticket reseller, but the Rio organisers rejected this. The authorities claim Pro10 effectively acted as “a bridge” to get tickets from the OCI to THG.

Mr Hickey, THG, Pro10 and Mr Mallon have denied having a role in any impropriety. A spokesman for the International Olympic Committee said “the presumption of innocence prevails” in his case.

Overnight a judge rejected an application by lawyers by Mr Hickey for habeus corpus, or claiming that his detention was unlawful.

Mr Hickey (71) was on Thursday released from a Rio hospital where he was taken after falling ill following his arrest at a hotel in the city on Wednesday.

An OCI statement released after Mr Hickey left the hospital said: “The Olympic Council of Ireland can confirm that Pat Hickey has been discharged from hospital and has been accompanied to a police station to complete a deposition.”

Police in Brazil say they have gathered evidence that Mr Hickey was involved in a touting operation with British company THG Sports, whose Dublin finance director Kevin Mallon was arrested in Rio on August 5th in possession of 823 tickets said to have been earmarked for the OCI.

Mr Hickey is accused of intending to supply tickets for ticket touting, diverting tickets from legitimate use and false marketing. The Brazilian police investigation is now focusing on the content of Mr Hickey’s laptops and phones seized during his arrest.