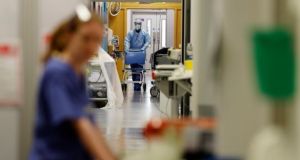 The committee will hear on Tuesday from trade unions and the Health Service Executive. Photograph: Alan Betson

Healthcare workers may have failed to declare symptoms of coronavirus out of fear of losing additional overtime or premium payments, an Oireachtas committee will hear on Tuesday.

In a submission to the Oireachtas committee on the pandemic, trade union Siptu said the decision of the Department of Public Expenditure and Reform not to permit employers pay their staff as per their roster if they were put on Covid-19 related leave, “resulted in significant financial disadvantage being incurred”.

The committee will hear on Tuesday from trade unions and the Health Service Executive about the 8,300 healthcare workers – almost a third of all known Covid-19 cases in the State – who have contracted the disease.

In a separate submission, the Irish Medical Organisation has warned that adequate roster arrangements must be put in place to cover workers absent with the virus or who are excluded as potential close contacts of a case.

Dr Glynn described the workplace, and particularly shops, services and supermarkets, as the “new front line”.

The medic used Monday’s National Public Health Emergency Team (Nphet) briefing at the Department of Health to remind workers to keep a physical distance from colleagues. He used the example of the “first significant cluster on a construction site to date” – located in Dublin city centre where more than 20 cases have so far been identified – to warn employers about the continuing risk from the virus. He reported no new deaths from the disease and six new confirmed cases.