Offensive graffiti in Dublin altered to ‘All Muslims are sound’

‘Maybe that is the way to treat things. Instead of getting angry and annoyed, just change it’ 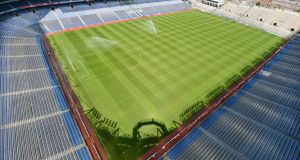 The graffiti was on a wall near Croke Park in Dublin.

Support for the Muslim community has been shown in Dublin by a minor alteration to some offensive graffiti.

The words “All Muslims are scum” were daubed on a wall close to Croke Park in the wake of the Brussels attacks which left more than 30 people dead and hundreds more injured.

But it has been changed to a more inclusive message which now reads “All Muslims are sound”.

Pictures of the amended graffiti have been distributed widely on social media.

Fazel Ryklief, from the Islamic Foundation of Ireland, welcomed the move. “Maybe that is the way to treat things. Instead of getting angry and annoyed, just change it. Putting it aside is perhaps better than making a big deal of these things. It brings a little smile to know that someone has a sense of humour.”