Nurses on picket duty at St James's Hospital Dublin are appealing to the government to enter negotiations to resolve the current dispute with the Irish Nurses and Midwives Organisation. Video: Bryan O'Brien 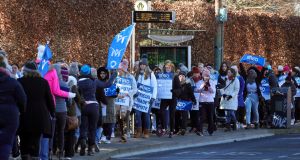 As nearly 40,000 nurses and midwives stage a second day on strike on Tuesday, the HSE has warned that emergency departments will come under “extreme pressure” and all mental health services face “significant disruption”.

Nursing unions last night rejected proposals by Minister for Health Simon Harris and Minister for Public Expenditure Paschal Donohoe that there should be new talks on resolving the dispute which, they said, should focus on issues relating to staffing levels and working conditions but not pay .

Mr Harris said such talks could deal with issues such as staff shortages, undergraduate education, future nursing needs and reducing the number of personnel provided through agencies.

However, Irish Nurses and Midwives Organisation (INMO) general secretary Phil Ní Sheaghdha said the Government initiative was the “the most cynical move I have seen in a long time”.

Rejecting the proposal as Government spin, she said it was massively disrespectful to nurses and patients.

Meanwhile, the Psychiatric Nurses Association (PNA) said “any talks that did not address pay would be of no benefit in resolving current nursing dispute”.

In a joint statement on Monday evening, the two Ministers said said they were disappointed that nurses and midwives represented by the INMO were to stage further strikes on Tuesday and on Thursday this week.

The HSE said about 50,000 people would have scheduled appointments in hospitals and community services cancelled as a result of the work stoppages.

The Ministers said the Government was willing to engage in talks on the range of workplace-related issues other than pay to try to resolve the dispute.

“This initiative could focus on the contribution and arrangements for the further rollout of the ‘Safe Staffing Framework’ to improve staff and patient outcomes and reduce reliance on agency staffing in our hospitals. In addition, this engagement would encompass other relevant organisational issues appropriate to supporting quality and efficiency in the provision of patient service delivery in an integrated way.”

They said the Workplace Relations Commission was willing to facilitate further engagement between nursing unions and public service management.

Ms Ní Sheaghdha said the non-pay issues involving nursing had been addressed in an agreement brokered in 2017 but the HSE had not been able to implement it because it could not find sufficient nurses to fill posts.

Meanwhile, the HSE said Tuesday’s strike was expected to affect about double the number of people who were impacted by the previous work stoppage last Wednesday.

For the first time, respite and rehabilitation services will be affected. Mr Harris said he was disappointed disability services had been brought within the scope of the strike.

It is understood that health service managers are concerned at moves by the PNA to escalate its overtime ban on Wednesday and Thursday to cover a full 24 hours, including overnight rosters. A daytime overtime ban will be in place on Tuesday.

The HSE said this would lead to “significant disruptions” to all its mental health services” this week.

Angela Fitzgerald, the HSE’s national director for acute operations, said maternity services would operate as normal but urged any person with a minor injury to see their GP, warning of “significant delays” in emergency departments. She said a small number of urgent and complex surgery appointments would go ahead.