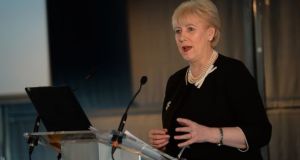 Minister for Social Protection Heather Humphreys on Monday brought proposals to the Cabinet which would attribute PRSI contributions to people who have lost employment due to the public health crisis. File photograph: Dara Mac Dónaill/The Irish Times

The number of people receiving the Government’s special pandemic unemployment payment has fallen by more than 67,000 - the largest drop in a single week since the scheme was introduced in March.

Separately the Government is to introduce new legislation to protect entitlement to social insurance-related benefits for people who lost their jobs due to the pandemic and who have been receiving the special Covid-19 unemployment payment.

The Department of Social Protection said on Monday that the numbers receiving the pandemic unemployment payment had now reduced by 42 per cent, or by more than 250,000 since the peak of nearly 600,000 in early May.

Separately, Minister for Social Protection Heather Humphreys on Monday brought proposals to the Cabinet which would attribute PRSI contributions to people who have lost employment due to the public health crisis.

At present those receiving the Covid -19 pandemic unemployment payment do not qualify for allocation of either paid or credited social insurance contributions.

However the Government believed that because of the exception nature of the pandemic, new legislation should be introduced which would see recipients of the Covid-19 unemployment payment become entitled to the equivalent of paid contributions at the same class (eg Class A if employees) as those they received while in employment.

It is understood that the move is aimed at protecting the entitlement of a recipient of the special Covid unemployment payment to future benefits - both long-term payments, such as pensions, but also particularly to shorter term payments such as illness, maternity and paternity benefits which require a contribution record up to the date at which benefit is claimed.

Under the Government’s proposed new legislation recipients of jobseeker’s payments who lost employment since 13th March and people on the separate Temporary Wage Subsidy Scheme will also benefit .

The department said that in the past seven days, 44,400 people had closed their claim for a pandemic unemployment payment. It said 19,800 people would be receiving their final payment on Tuesday.

The scheme involves a weekly payment, paid in arrears, and the department said there could be a one-week lag in how closures of claims, due to people returning to work, were reflected in the payment data.

This is the second week of operation of the new two-tiered payment structure for people receiving the pandemic unemployment payment.

Just under 250,000 people - or three quarters of those covered by the scheme - will continue to receive the original payment of €350.

In addition to those covered by the special pandemic unemployment payment, about 405,000 people working for nearly 67,000 employers are having their wages supported by the Government’s separate Temporary Covid-19 Wage Subsidy Scheme.

A further 220,900 people were on the live register at the end of June.

Ms Humphreys said it was “ heartening to see that the phased approach set out in the [Government’s] roadmap to recovery is now being reflected in the number of people returning to work”.

She said: “Today’s figures are reassuring for employees, businesses and communities throughout the State as they clearly show people getting back to work with a significant fall in the number of people in every county receiving the pandemic unemployment payment. A further 44,400 people have closed their claims in the past week with 36,600 of these confirming that they are returning to work. I am particularly pleased to see that the number of employees in the accommodation and food service area who are back in work again being supported by the Government’s Temporary Wage Subsidy scheme. This number has increased from 8,100 last week to 22,000 this week.

“The Government is now finalising its work on preparing the July economic stimulus package that will drive the way for an economic recovery. I am confident this will help the thousands of workers and businesses who were badly impacted as a result of the Covid-19 pandemic.”