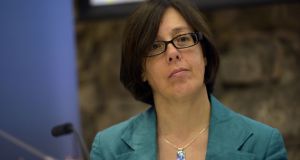 The National Transport Authority is designing rapid bus corridors which it does not have the money to build, authority chief executive Anne Graham has told a transport conference.

Ms Graham said the National Transport Strategy 2016-2035, which included items such as Metro North and Metro South in Dublin, an expanded bus network, electrification of Dublin suburban rail lines and Dart Underground, had been costed at €10 billion.

Comparing the figure of €10 billion over 20 years to the €16 billion she said had been allocated to the then National Roads Authority for the development of motorways over about 10 years, she concluded the National Transport Strategy looked like “a realistic project” .

She said the funding required to implement the strategy was half a billion euro per year.

However, the Government’s seven-year capital plan for the years up to 2021 had not included that level of funding.

She said the funding for public transport over the seven years amounted to €3.6 billion, “but that funding also includes the steady safe maintenance funding of existing infrastructure”.

Because of this, the authority was facing a challenge in delivering aspects of the National Transport Strategy, she said.

“Our challenge is, at this stage, there is not the level of funding available to achieve the [new] infrastructure in the next number of years,” she told the conference.

While many of the projects, such as the metros, are longer-term, Ms Graham said the authority was designing rapid bus corridors which it did not currently have the money to build.

While the funding was not yet “at that level” to allow for construction of the corridors, she said the authority would continue to design schemes that would be “shovel-ready” when funding came through.

Among the authority’s plans for bus services is a 24-hour service on selected routes in the greater Dublin area.

The authority has also proposed a new “livery” for all State-subsidised bus services, a rebranding which would encompass all Dublin Bus services, about half of the Bus Éireann fleet and a number of private operators who operate subsidised routes under tender.

The National Transport Authority will also assume regulation of the clamping industry later this year.

The legislation necessary for this was passed in 2015 and powers started to be transferred from the Department of Transport to the National Transport Authority before the end of last year.

She also warned of the danger of responding to the housing crisis by building homes in inappropriate places.

Referring to a recently-published guidance document for builders, Ms Graham said the document promoted the constructing of homes along rail routes.

Ms Graham was delivering the keynote address to the conference of the Irish Transport Research Network, which continues in DIT Grangegorman on Friday.