Not a normal St Patrick’s Day, but plenty still found time for a walk

Despite coronavirus worries, walkers along the east coast were out to enjoy fresh air 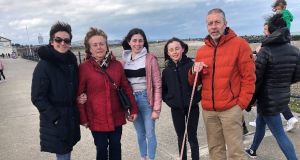 There was some evidence of social distancing among those out for fresh air on the east coast on St Patrick’s Day, but it was hard to spot.

From mid-morning there were traffic jams on the seafront in Bray as a large contingent of locals and Dubliners sought a break from working at home or self-isolating.

In Dún Laoghaire, crowds walked the east and west piers, while the usual Co Wicklow bank holiday venues of Powerscourt House and Avoca in Kilmacanogue were quieter then normal, but still busy.

On Bray promenade Daragh and Linda Butler from Finglas were set “to get out, to get some fresh air” for themselves and their children Olivia (6), Tommy (2) and two-week-old Eleanor.

Daragh, a musician, would normally have been playing in Dublin pubs and venues on St Patrick’s Day. He also plays guitar in his local Church of Christian Science. But the coronavirus came along, coinciding with the arrival of his and Linda’s newest arrival, Eleanor. “Yeah, the money is a worry, you don’t know how long it is going to last”, he said.

Also taking the air on the promenade was Kathleen Sheeran, owner of the well-known “The Club” bar in Dalkey. Kathleen was accompanied by three generations of her family: daughter Miriam Smyth, Miriam’s husband Aidan and their children Rachel and Eve.

“We needed to get out, we go for a walk in different places, we decided to come to Bray today,” said Miriam. “We are worried about the virus but we are keeping together and trying to keep a distance from each other” she added stepping backwards.

Julie Fleming and her boyfriend Pete Lawless from Stillorgan had walked the “seven or eight” kilometres around the cliffs on Bray Head to emerge in the new harbour development in Greystones. They were hoping to find the French creperie open, but knew the Beach House pub was off limits. Many walkers set off for Main Street and the railway station in search of a coffee shop. “Yes, we are concerned about the virus but we are getting out now while we can”, said Julie.

On the east pier in Dún Laoghaire retired couple Sarah and John Mulligan were taking a walk “as we always do”.

“Look at all these people – you can’t keep them cooped up indoors on the first fine spring day we have had,” said John.

In Greystones, the town now famous for its coffee shops, Main Street was quiet. The Happy Pear, which usually boasts queues down the street on bank holidays, was closed in the afternoon. Tables outside Camile Thai were spaced far from each other. A few walkers sat around the railway station waiting for the train back to Bray.

At Powerscourt House in Enniskerry, Evandro Dos Ramos had cycled out from Dublin on his bike. He said the situation with coronavirus was “very serious” but he felt safe cycling on his bike - “ at least from the virus” he commented, adding that some of the roads were dangerous.

Painter and decorator Peter Byrne from Shankill was taking his wife Anne and mother-in-law Maureen out for a break. “You have got to get out of the house. No, I’m not worried about us, we got some lovely bread to take home,” he said gesturing towards Powerscourt House where, for once, there was plenty of space to sit and enjoy a coffee. Some tables had been removed but there were plenty more on the open air terrace.