Belfast City Council apologises for ‘error of judgment’ over funeral 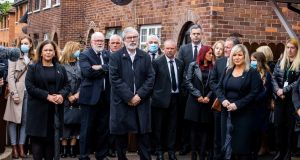 The North’s Assembly will debate a motion on Tuesday calling on the Deputy First Minister to apologise for her actions at the funeral of former IRA member Bobby Storey.

The other parties in the Northern Executive have accused Michelle O’Neill of breaching the coronavirus regulations and social distancing guidelines at the funeral, which she denies.

On Monday, Belfast City Council apologised to eight families who were not allowed to attend the cremation of their loved ones on the same day 30 people were present at a cremation service for Mr Storey.

The council said it was an “error of judgment” and it was in the process of contacting the families affected. “We are deeply sorry for how this error will have affected them and any hurt and distress caused,” it said in a statement.

A woman whose mother was one of the eight people cremated on the same day as Mr Storey told the BBC, “obviously we’re not all equal in death after all”.

The North’s First Minister, Arlene Foster, said Belfast City Council had “a lot of questions to answer” and the DUP intended to pursue the matter through its councillors.

Brought before the Assembly to answer an urgent question from Traditional Unionist Voice (TUV) leader Jim Allister, Ms O’Neill reiterated her apology to grieving families who had been hurt by her presence at the funeral.

“I would never compound any family’s grief, and I’ve said that I’m sorry for that,” she said.

She also said the Police Service of Northern Ireland (PSNI) had not spoken directly to her as part of their investigation.

The motion, which is signed by representatives from the other four parties in the Executive – the DUP, SDLP, Ulster Unionists and Alliance – calls on both Ms O’Neill and Minister for Finance Conor Murphy to apologise for their actions “which have caused immense hurt”.

It acknowledges the “immense sacrifices” made by the public during the pandemic and expresses “disappointment in the actions of those in ministerial office who breached public guidance and failed to share in the sacrifice that we have asked of others”.

The debate, which will take place on Tuesday evening, is scheduled to last about 1½ hours, but MLAs cannot force an apology or impose other sanctions.

Under changes to the coronavirus regulations which came into effect at 11pm on June 29th, the number of people allowed to gather outdoors increased from 10 to 30.

The City of Belfast Crematorium, which is located in Roselawn Cemetery and is operated by Belfast City Council, had been closed to mourners since the beginning of the coronavirus outbreak. Up to 10 people were allowed to attend burials, but nobody could be present at a service after a cremation.

The change in the regulations meant up to 30 people could be present at an outdoor committal service following the cremation of a loved one.

The council said an “operational decision was made that for cremations the new procedures would apply from the cremation of Bobby Storey on the afternoon of Tuesday, June 30th, onwards”.

This meant that Mr Storey’s was the only one of the nine cremation services which took place at Roselawn on June 29th which had mourners in attendance.

However, of the four burial services which took place in Roselawn on Tuesday, all had up to 30 people present.