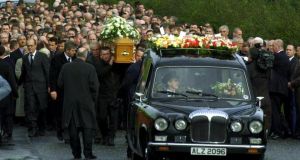 The North’s Public Prosecution Service (PPS) has announced it is no longer in a position to ask a court to review the sentence given to a loyalist supergrass involved in the murder of Sunday World journalist Martin O’Hagan.

In June the PPS decided to refer Neil Hyde back to court for his involvement in the 2001 Loyalist Volunteer Force murder, as well as for other offences.

Hyde received a heavily reduced sentence of three years for his part in the killing of the investigative journalist. Mr O’Hagan was shot dead in Lurgan, Co Armagh as he was walking home from a night out with his wife Marie in September 2001.

Hyde’s sentence was reduced from a minimum of 18 years to three years after he agreed to become an “assisting offender” or “supergrass” and testify against his alleged LVF accomplices. However, this trial did not go ahead as expected earlier this year because the PPS decided it could not trust Hyde’s evidence.

A review of his case could have led to Hyde having to serve his original sentence of a minimum of 18 years.

However, the PPS said today the “evidence which is now available is not sufficient to establish a breach of the agreement by Neil Hyde to the requisite standard.

“Accordingly there is no longer a basis to refer the matter to the court. The court has therefore been informed that the PPS no longer seeks the review of the sentence,” it said in a statement.

The director of the PPS Barra McGrory said he now intends to refer the matter to the Police Ombudsman for investigation.