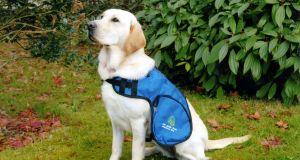 New arrangements for bringing pets and assistance dogs to Northern Ireland from Great Britain are in effect following the end of the Brexit transition period on January 1st.

The North’s Chief Veterinary Officer has pledged that assistance dogs will not be prevented from entering Northern Ireland from Great Britain despite new rules covering the travel of pets across the Irish Sea border.

“No genuine assistance dog will be turned back,” Robert Huey said. “We will find a way of doing it.

“I don’t want to say much more because I’d be admitting to breaking the law so I’m not going to go there.”

Mr Huey appeared before the Stormont Agriculture Committee on Thursday, and was questioned by MLAs about new arrangements for bringing pets and assistance dogs to Northern Ireland from Great Britain following the end of the Brexit transition period on January 1st.

The UK has Part 2 listed status under the EU Pet Travel Scheme, which means that pet dogs and assistance dogs, as well as cats and ferrets, ravelling from Great Britain to Northern Ireland must have an Animal Health Certificate (AHC) from a vet and arrive through an official point of entry.

They must also be vaccinated against rabies and dogs must be treated for tapeworm. Neither disease is present on the island of Ireland. There is no such requirement for pets or assistance dogs travelling from Northern Ireland to Great Britain.

This, he said, was “common sense” and would “alleviate the real and serious concerns of pet travelers across all jurisdictions.”

He said the difficulties caused to assistance dog owners and assistance training puppies meant “some of the most vulnerable in our society are being directly affected. This cannot and must not be the case,” he said.

The Chief Veterinary Officer said officials in Northern Ireland would not enforce the new rules until February 1st “to give people a chance to get ready.”

The new requirements, he said, were “onerous and it is expensive and in my view it’s unnecessary.”

His officials, Mr Huey said, had been working with colleagues in London and Dublin to try to find a resolution, and while he was hopeful it would be solved, he did not believe it would be soon.

“I was hopeful that at an operational level I would be able to find some room for pragmatism but the legislation is written in a very black and white way, I can find no wiggle at all, so I have no alternative but to enforce this legislation,” he said.

In a statement on its website, the UK government said it recognised the changes would take time to adjust to and it was working with the authorities in the North “on an enforcement approach that takes this challenge into account.

“This approach will be implemented in a way which supports pet owners and assistance dog users while the Government pursues a permanent solution,” it said.