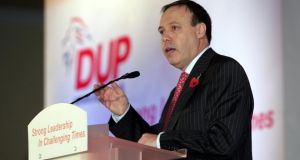 Two tribes: “North Belfast is starkly divided,” says Dodds. “I wouldn’t canvass on my own in Ardoyne, let’s put it that way.” Photograph: The Irish Times

North Belfast is the constituency where we have the frequently violent loyalist-nationalist stand-off each Twelfth of July night.

In this patchwork of Orange and Green areas, the two main contenders, outgoing DUP Nigel Dodds and Sinn Féin Assembly member Gerry Kelly, need to know where they are going when out trawling for votes.

On this day when joining Sinn Féin on canvass, the instruction is to follow behind Kelly’s car so as not to get lost going from the Antrim Road to Ligoniel underneath Cave Hill.

There is a lot of rat-running through side streets and even, it seems, a bit of double-backing on ourselves before we reach Ligoniel.

It all makes sense. No point stalling beside the loyalist Camp Twaddell close to the Ardoyne shops interface, especially when Gerry Adams is part of the entourage.

The outgoing DUP MP Nigel Dodds must be equally vigilant. “North Belfast is starkly divided,” he says. “I wouldn’t canvass on my own in Ardoyne, let’s put it that way.”

Sinn Féin has been seriously chasing this seat for more that a decade. There have been demographic shifts, with nationalists now narrowly in the majority here. For the past three Westminster elections Kelly has been getting closer and closer to Dodds: he was 6,400 votes behind in 2001, just 2,200 votes shy of him in 2010. 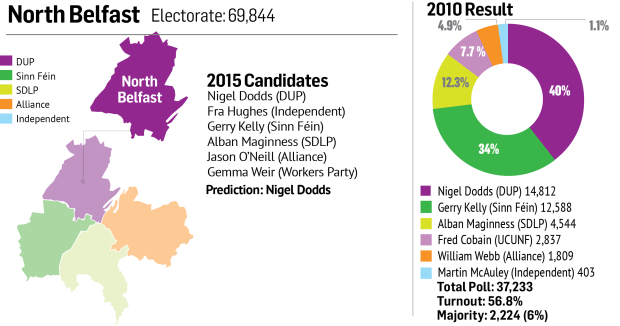 Dodds’s prospects of holding the seat are enhanced by the DUP-UUP pact, which means he is the only unionist candidate. Yet Dodds knows he can’t take anything for granted. The turnout five years ago was 57 per cent, so if more nationalists come out to vote or if a significant number of SDLP supporters “lend” their votes to Kelly, then the Sinn Féin man would have a real chance.

Which is why the party has brought in the big gun, so to speak, in the shape of Gerry Adams to do a fly-through North Belfast. For Sinn Féin it seems remarkably ill-disciplined canvass, with the team almost rushing through the little Ligoniel estates, missing several houses.

Kelly explains, however, that this area has been canvassed twice before and the purpose of the exercise is for local people to know that the Sinn Féin president has graced them with his presence, even if it is a whirlwind dash-through.

Adams takes time to insist that Kelly could very well take the seat. “I think a number of SDLP voters have indicated to us that they are going to vote for Gerry this time,” he says.

The SDLP candidate Alban Maginness polled 4,500 votes five years ago and some of those votes could assist Kelly.

Former Sinn Féin councillor Conor Maskey, who is out on the canvass, says he is convinced many SDLP voters understand that by shifting loyalty, even temporarily, they could get Dodds out. “They get it now,” he says.

So, can Dodds resist that threat? “We are confident that we will do well and keep the seat,” he says.

He doesn’t believe the controversy that led to DUP minister Jim Wells resigning will damage the party. He says if anything unionists are sympathetic and feel he has been “hounded” out of office. And Dodds is certain that if DUP votes are required to elect the next British prime minister both Tory and Labour HQs will be love-bombing party MPs.

The DUP having a “pivotal” role in determining who is the next British prime minister is also playing well on the doorstep in North Belfast, he adds.

“We are not arrogant enough to think we are going to write the queen’s speech in the first budget but we could play a big role in terms of influencing what can go into the budget,” he says.

As well as Dodds, Kelly and Maginness, Jason O’Neill of Alliance, Gemma Weir of the Workers’ Party and independent Fra Hughes are also running.

The odds are that the unionist accord plus the possibility of the DUP holding the balance of power should see Dodds returned. But it could be very close and the Sinn Féin chase will continue, pact or no pact.