No fairytale Christmas for Irish forced to remain in New York 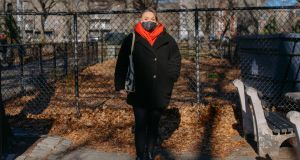 Dubliner Molly Thompson-Tubridy, 25, in Brooklyn. The art history graduate will be spending Christmas Day on her own in the New York.

For Molly Thompson-Tubridy, the journey home to family in Dublin last Christmas “was like a scene from the film Love Actually, filled with expectation”. This year, Christmas in New York will be on screen, too, but this time it is Zoom, not the movies.

With her roommates gone from their Brooklyn apartment, she will be on her own on Christmas Day. Nevertheless, traditions will be kept: “I’m putting a tree up, just as I would be at home,” she said.

“It will just be me, but I will try and cook up a whole Christmas meal. I’m going to have my laptop set up and Zoom and FaceTime will be open all day,” said Thompson-Tubridy, who has been living in New York since April.

Like many other young Irish people in New York on temporary visas, the 25-year-old, whose half-brother is RTÉ presenter Ryan Tubridy, long abandoned any thoughts of Christmas in Ireland.

That decision was taken following president Donald Trump’s move to ban a return by any such visa holders who left.

Having studied art history in Dublin, she arrived in New York on a graduate visa and worked for an art gallery in Chelsea. Quickly promoted, she was sent to work in Miami on an exhibition. Everything, she said, “was going great”.

Then, Covid-19 hit New York: “The whole plan was to stay on; they were going to sponsor a work visa, but with Covid it all went downhill from the start of 2020,” she says.

With an extension to her graduate visa until next summer, she is now on a B2 visitor visa and living off savings while she looks for work. With that, hopefully, will come a new sponsored work visa.

Leaving now for Christmas at home would scupper her chances of finding work in New York, said the art history graduate, where opportunities in her field are far better than back in Dublin, no matter how much she is missing family.

“I have never missed Christmas. It is heartbreaking; I don’t know when I’ll be able to see them next. It is sad, but I look at it like I would be so much more sad if I had to go home permanently.”

The New York Irish Center, which has put most of its events online for months, is now hosting a Christmas concert live on Youtube to bring the Irish in the city together, said Stephen Long, director of cultural programmes.

Earlier this month, its front window on Jackson Avenue in Long Island was transformed into Santa’s den, where children on the other side of the glass had the opportunity to tell the great man what they hoped for on the 25th.

The pandemic has left the Irish in New York feeling “unsettled”, said Sandra Feeney-Charles, executive director of the Aisling Irish Community Center in Yonkers. “Christmas away from home is always more difficult.”

A “significant number” of recently arrived Irish emigrants returned home earlier in the year, when they could – driven away by an inability to get work as bars, restaurants and buildings sites closed.

“With all the restrictions Covid imposes, along with being so far removed from family, and being advised not to congregate in larger groups as one would typically do at this time of year, this Christmas will likely be more difficult for most,” she said.

Dubliner John Bowden, who has lived in New York since December 2014, will depend on video calls this year to keep in touch with family back in Ireland – it will be only his second time to be away from them for Christmas.

“To be frank, a good portion of [the reason not to leave] was the ability to get back in to the US,” he said. “My life is here, I have a girlfriend here; I was worried about getting back in.”

An only child, his decision to stay has been difficult for his parents. who are, however, understanding: “Mum is emotional and sad I won’t be coming home. I have to explain it’s not by choice. It will just be the two of them.”

“But I also know the Christmas I dream of in Ireland won’t be there; I wouldn’t be going into the Millhouse [pub in Stillorgan] for pints on Christmas Eve; I wouldn’t be at the races on Stephen’s Day,” he added.

The pandemic, though, has offered a perspective on home he did not have before; that perhaps can only come in the face of challenges, absence and longing. “Dublin has so much to offer. New York got found out this year; the things I loved disappeared very quickly. In Dublin you can go to the mountains and on hikes. Things I took for granted. Things you can’t do here as easily.”